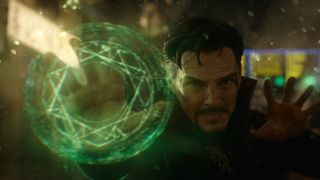 Marvel's next feature arrives in just over a month, and so far, we've seen a fair chunk of footage. Doctor Strange isn't like the rest of the MCU movies. It's a dark, supernatural tale that's apparently gonna be unlike anything we've seen The Avengers and co. get up to. There's out-of-body weirdness, alternate dimensions, and cities getting flopped together like a stack of crepes. Tying it all together is Benedict Cumberbatch's former doc, and it's he who takes the spotlight in this new featurette. Obviously. I mean, the movie is about him. Check it out below:

Not a load of unseen material, but there's a handful of new touches here and there between all the cast and crew chatter. It doesn't really get old watching Cumberbatch dally with magic.

However, the most intriguing element of this film to me syncs up with what Marvel head Kevin Feige says in the video. He chimes in with a comment on the film's villains, describing them as being "seduced by what they find on the other side. They are interested in splitting the barriers between these dimensions." You've got to love bad guys who just want to completely decimate the universe, because. There's probably a good reason in their heads, of course. Hopefully the scheme of Mads Mikkelsen's Kaecilius will help make Doctor Strange an above-average origin tale.