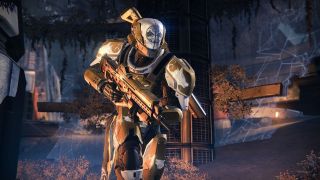 The end is in sight. Destiny 2 is coming. We know it, you know it, and now Bungie has finally admitted it, by way of the Age of Triumph, a final, celebratory special event with which to look back on and commemorate everything that we Guardians have achieved over the last three years.

It sounds great, but it does bring a slight hint of pressure. Because let’s face it, we’re all going to want to go out in style, equipped with our finest finery and having capped out the maximum Light level of 400 by the time Destiny 2 does come around (probably in September). That means one thing: It’s time to crunch levels and accrue new gear hard. As with every major stage of Destiny progress though, the upper reaches of the Light rankings can involve a bit of a plateau, with many players reporting a bit of a slow-down around the mid-to-high 380s. Fortunately, as ever, this is temporary, and is simply Destiny’s way of pushing you toward a more proactive leveling approach. What should that approach be? Read on, and I’ll tell you the fastest and most efficient way possible to hit 400.

Seriously. At this point they are almost dead to you. When it comes to Engrams, Exotics are now your priority. The once trusty old purples cap out at 385 Light when decrypted, meaning that the vast majority of the gear they furnish will – unless it randomly morphs into an Exotic on decryption, which isn’t unknown - be good only for breaking down into Legendary Marks. Marks which will be significantly less useful themselves than they once were, given that the Vanguard shops don’t sell anything of a high enough level anyway.

However, all hope is not lost. The 385 – 400 period of Destiny is simply about refocusing, and really honing in on what you want and need. And there are two things you need. ‘Fresh’ (ie. unencrypted) Legendary gear drops, and Exotic drops in any form. They are the only things that will consistently come with equal or higher Light compared to your current level. Whether you equip them, or just use them as fuel to Infuse your current gear up to a higher level, they are now your chief goal. As for getting them, there are a couple of specific techniques for maintaining a decent turnover. But first of all you need to be aware that…

Three of Coins is your new lifestyle

Every weekend, travelling merchant - and master of a million hobbies - Xur, will appear somewhere in one of Destiny’s social areas (check out our Xur articles every Friday to find out where he is and what he's got). But whatever Exotic armour and – if you’re lucky – weapons he has with him, you should always stock up on a fresh weekly supply of Three of Coins. He always has them, and thus, so should you. They’re the backbone of your path to greatness.

ToC boosts your chances of getting an Exotic Engram drop upon defeating the next boss you face. It also does the same at the end of Crucible matches. Simply activate one at the start of an activity and plough on. If the Exotic doesn’t drop, just start a new mission or match, and pop another. Every time you fire one up, the chance of that gleaming yellow delight will increase, the stacking probability buff only resetting once you actually score one. As long as you have enough ToCs in your inventory, you literally cannot lose. Exotics always drop at a decently high Light level, and even if they aren’t what you want, the Infusion system means that they will be useful for your overall growth.

As for the exact activities you should be hitting with Threes...

It’s mostly all about the Strike playlist

Mostly, but not entirely. But I’ll come on to that in a moment. Your most regular, day-to-day activity though, needs to be the SIVA Crisis playlist. It’s available all the time, it’s match-made, meaning that you’ll always have a fireteam ready to go, and it contains multiple avenues through which to attain the right gear. First up, always have a Three of Coins running. Always. Do that, and you’ll tend to find you get at least a couple of Exotic drops per play-session. But that’s just one prong of the Vanguard trident of looting.

You should also make sure to play Strikes with a Vanguard streak active. All that entails is staying in the Strike playlist without manually booting back to orbit. This will steadily increase the quality of your drops at the end of each Strike, making those fresh purples more likely. And finally? Skeleton keys. You’ll get these as sporadic, end-of-Strike drops. They open the special, Strike-specific loot chests that appear after the boss goes down. The gear in that chest will almost always have a very decent Light rating. In fact you’ll often find that it comes a bit above-and-beyond that of standard fresh drops. You want to open as many of these as possible.

In fact, given that keys drop before the mission times out, you might as well use them straight away. It doesn’t matter if you’ve already got all the unique gear from any particular Strike chest or not. Even if you don’t get a piece you’re specifically after, this stuff is all great Infusion fuel. Again, you cannot lose. The only reason you should save a Skeleton Key is if you’re imminently planning to…

The weekly Nightfall Strike, which refreshes every Tuesday as part of the weekly reset, is the motherlode of potential Strike rewards. Packing the usual loot chest, as well as the scope for dropping fresh Legendary and Exotic gear, both flavours of Engram, high-level Ghost shells and more Skeleton Keys, it’s your best, single-shot chance at a big haul. And if you’ve put off tackling it due to how unremittingly difficult it used to be, don’t worry. The modern Nightfall is far less punishing.

It runs at a Light level of 380, which is tough but entirely manageable if you’re at the 385+ level you probably are if you’re reading this guide, and team wipes now only result in a checkpoint reset. Revives are only available after a 30-second countdown, but diligent play will mean that shouldn’t be too much of a problem. You will need a pre-made fireteam, as Nightfalls aren’t match-made, but the flipside of that is that a team of organised friends is always going to have an easier time of it than a crew of randoms. Do not fear the Nightfall. Get stuck straight in, and it will reward you handsomely.

Play the Iron Banner every time it comes into rotation

I get it. I know not everyone is a diehard PvP player. I know that early Iron Banners were punishing, the combination of active player level advantages and a grind-heavy rewards system – which demanded slow, bespoke Bounty progress in order to unlock the ability to buy high-level gear from the Iron Banner shop – making it a hell of a chore for all but the strongest and most dedicated of Crucible players.

These days though, like much of Destiny since the Rise of Iron expansion hit, the Iron Banner is a hell of a lot more friendly and rewarding. For starters, the weekly Bounties are really easy to clock through normal play, and deliver enough Iron Banner XP as to allow you to hit the event’s level cap with a couple of days’ concerted play. But more importantly, the end-of-match reward sequence now drops like crazy, throwing out fresh Legendaries like confetti. Session it for an evening, and you’re likely to get multiple free versions of the Banner store gear, all at a respectable and useful Light level, making for a hell of a week-long Infusion spree. The dropped gear might not always have perk rolls as good as those of the versions in the store, but its frequency and Light quota more than make up for that.

Throw in Three of Coins – which works at the end of multiplayer matches in the same way that it does after bosses fall, but much more regularly given the shorter run-times of PvP battles – and you’ve basically got the most efficient Light production line in the game.

Another great, and relatively quick and easy, source of high-Light loot - albeit one with limited scope compared to the above - is the Archon's Forge PvE battle arena in the Plaguelands. You'll need a SIVA offering to activate it - acquired via drops on Patrol and in the Forge itself - which come in three tiers, triggering increasing difficulties of fight. The higher the difficulty, the higher the drop rate of gear, and with class items for all three Guardian classes dropping up to Light-level 400, it's a handy, and time-friendly, way to level up at least one of your gear categories, as long as there are people around to play with. But there usually are.

Just make sure that you contribute your own SIVA offerings to the group rather than just piggybacking on theirs. Only jerks piggyback. Don't be a jerk.

And rounding off with a bit of general housekeeping...

Equip your best current gear while doing ANYTHING

An interesting background system that you're probably already aware of, but just to make sure: Since Year Two, Destiny will always try to give you drops that are at least as good as your current gear. Important point though. This system calculates its output based on the gear you currently have equipped, right the very second the drop lands, and not the stuff that you have sitting around in your vault or waiting for equip in your inventory. If you’ve got it, flaunt it, and you shall be rewarded.

As such, you should try to equip or Infuse new, higher-level gear as soon as you get it, so that your level is always topped up for the next drop.

Oh, and just in the name of super-efficiency…

Got multiple characters you’re trying to get up to the same level? Then there’s another boost you can use. Just pass your lower-level characters’ Exotic Engrams over to your high-flyer, by way of the vault, and get Mr. or Mrs. Bigshot to decrypt them – with their own highest-level gear equipped, naturally. Then just pass the resulting items back through the vault and deal with it as you will. Similarly, if your higher-level character gets a Legendary that's too low to be of use, pass it back to your weaker Guardian and let them use it.