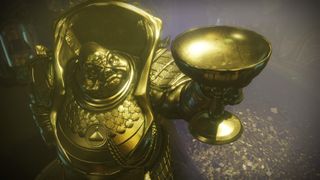 You can put up to three runes into the Chalice at once, with each rune adding another parameter to your loot. Opening the chest will consume these runes and give you a reward based on which runes you used. There are dozens of possible rune combinations, recipes and even more potential rewards, so in this guide we'll go over all the Destiny 2 Menagerie rune combos and what they give you. Let's start with the guns.

Destiny 2 Menagerie rune combos: The recipes you need to get specific guns

I put together some graphics to show how these menageries recipes and rune combinations work (click the "enlarge" button in the corner for a better look) because I find it's easier to show than to tell. Basically, your first rune determines what type of gun you receive: an SMG, sniper, rocket launcher (or one machine gun), hand cannon, sidearm, fusion rifle, or shotgun. Your second rune changes which SMG, sniper, hand cannon, or so on that you receive. And your third rune sets the Masterwork stat for that weapon.

If you want to double check your Destiny 2 Menagerie rune combos, try this tool made by Peter Phillips.

Getting armor from Menagerie recipes follows a similar process, but obviously runes will correspond to different things. Your first rune determines what armor piece you get: helmet, arms, chest, legs, or a class item. Your second rune affects which armor set that piece of gear comes from and determines its stat trait. For instance, putting any purple rune in the second slot will give you Tangled Web armor, but if you want a Recovery roll on that armor piece, you'll need to use a purple Beast rune specifically.

Finally, your third rune sets the elemental resistance for that armor piece. I didn't include these resistances in the above graphic because quite frankly they are a waste of runes and time. The elemental resistances on armor do next to nothing and aren't worth worrying about. For that reason, I never use a third rune when grinding armor in the Menagerie. If you must know, purple runes give arc resistance, red and blue give solar, and green give void.