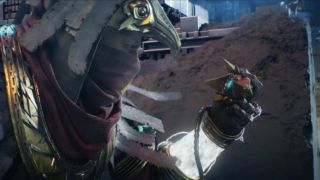 Bungie pulled back the solar-resistant curtain on Destiny 2: Curse of Osiris in its first DLC livestream today, revealing semi-infinite spaces to fight, the future of Raids, and the return of one sorely missed playlist. There was a lot of stuff to take in from the hour-plus livestream (which I've embedded below), so I've also written up the highlights.

Mercury and the Infinite Forest

Curse of Osiris will add two big, all-new areas to the game: one on the surface of Mercury, and one underneath it. Topside, players will be able to explore Mercury's Plains of Glass. The region surrounding the Lighthouse has become a staging area for Red Legion troops who fled The Almighty - which is ironic, given that The Almighty was tearing Mercury apart for fuel before you disabled it in the campaign. You'll find all the usual public area stuff here, including patrol missions, chests, and adventures. Bungie even teased that it's created a special Public Event just for Mercury - the largest one it's ever made.

Step through a huge portal on the surface of Mercury and you'll materialize miles away in the Infinite Forest of the Vex. It sounds like a nature preserve, but it's actually a gigantic subterranean simulator the Vex use to observe all possibilities of the past, present, and future as they hunt for, um, something. Something important. The key thing here is that you'll get to explore Mercury back when it was a lush Garden World of humanity and also see it eons later, in a future where the sun has gone dark and the Vex are all that remain. These missions will be made of randomized chunks, though Bungie spurned the term "procedurally generated," emphasizing how each part of the whole has been individually designed.

If you thought "new Raid content" meant an all-new Raid, you're going to be a bit disappointed by Curse of Osiris. Beyond that initial bummer is a pretty cool idea, though: with both of the Season Pass expansions, Bungie plans to add a new "Raid Lair" to the Leviathan Raid. These will take place in the same general location (in this case, on a giant, planet-eating ship) but offer new challenges, puzzles, places, and even a new end boss for players to overcome in a somewhat shorter overall experience. The Raid Lair coming in Curse of Osiris is called "Leviathan, Eater of Worlds" and it takes place underneath Calus' opulent Palace.

It isn't as cool as getting an all-new Raid. But it does mean that folks who enjoy raiding hopefully won't have to wait as long as they did in the first game to try out fresh challenges. Eater of Worlds will go live "a short time" after Curse of Osiris launches, and a prestige version will follow after that. Bungie also plans to bump up the Power Level requirements and rewards for the vanilla Leviathan raid, so players will still have reason to play it as well.

You can build Vex guns in the Lighthouse

The Lighthouse isn't just for Trials winners any more. It isn't a new social space, but it's also a bit more than an office for redeeming planetary tokens. There are little details to take in all around the area and - of utmost importance to Guardians everywhere - a way to make new guns. Once you finish the campaign you'll be privy to many of Osiris' secrets, one of which will let you build weapons that incorporate Vex designs. Collect the necessary materials out in the world, and you can bring them back to the Lighthouse's forge for some craftin'. A handy sigil chart on the wall even shows you how many of the weapons you've made and how many you have left to go.

The Heroic Strike playlist is coming back

Oh hell yeah. Bungie didn't give many details on the stream, but all you need to know is in the header there. Heroic Strikes are coming back, and they'll offer more powerful loot for overcoming increased challenge. The regular Strikes playlist isn't very rewarding once you get higher up in Power levels, so it'll be nice to have a tougher, more rewarding alternative. And don't say Nightfall already does that, because there's only one per week and it doesn't allow standard matchmaking. It's just not the same!

The next Destiny 2: Curse of Osiris stream is scheduled for 11am PST / 7pm GMT on November 21. Bungie plans to share more details about the new expansion activities we can embark on then. I'm pretty excited to hear about that big ol' public event, myself; stay tuned to GR+ to learn more as it happens.