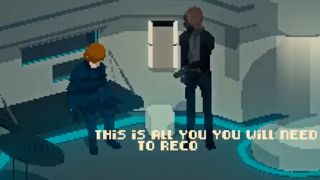 Death Stranding is the latest brainchild from famed video game director Hideo Kojima, but if there's an alternate universe where it released as Kojima was just starting out in the 80s, here it is.

And unfortunately, there was no more time to work on the other characters :( I started the character rig for Heartman and Deadman, and had already finished Higgs... but, it will be next time :). @darrenjcbs @TroyBakerVA pic.twitter.com/9vEaWndHOVDecember 5, 2019

Animator Fabricio Lima enjoyed his time playing Death Stranding so much that he decided to pay tribute to both the game and Kojima's very-early work on the MSX. A demake in the most faithful sense, this wonderful "low-fi" animation captures the somber, lonely mood of Death Stranding in a vintage package, with retro PC gaming visuals and a chiptune rendition of the score.

The stripped-down music and visuals add something distinctly haunting to Sam Porter Bridges' isolated trudging through harsh landscapes and encounters with BTs. Lima says he only had time for the few characters you see in the demake, but says he's working on modeling other characters including Heartman and Deadman. Lima even reveals a short look at his recreation of Higgs in a subsequent tweet.

Lima says it took around two weeks to adapt the character models and music to mimic games on the MSX. For reference, the MSX was the first console Kojima worked with as designer and the original home of the original Metal Gear game. Comparing his Death Stranding demake with games from the MSX era, it's clear Lima did his homework.