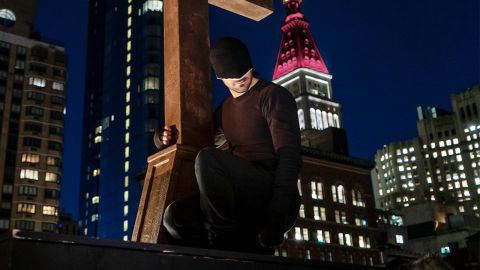 While Daredevil season 3 gets off to a painfully slow start, the Devil of Hell’s Kitchen eventually hits his stride and sees the show return to top form.

Daredevil season 3 premiered amid a wave of uncertainty about the future of the Marvel-Netflix universe, as both Iron Fist and Luke Cage were cancelled within days of each other. While not many will be sad to see Danny Rand and the Power Man go, after watching the Devil of Hell’s Kitchen’s third outing I think it’d be a shame to see him go the same way. While Daredevil season 3 gets off to a painfully slow start, picking up the threads left behind by the mediocre Defenders ending, the show eventually moves the story far enough away from those events to regain a true sense of self and bring it back to what made it such must-watch TV in the first place. Read on for our full Daredevil season 3 review, but beware of spoilers if you haven’t finished yet.

Make no mistake, while the latter half more than makes up for it, the first few episodes of Daredevil season 3 are hard to watch. Slow, emo, and boring, we find Matt Murdock/Daredevil (Charlie Cox) post-The Defenders, battered and bruised beyond belief, but alive and in the care of the nuns of St Agnes where he grew up. The more he recovers, the more he becomes embittered over the death of Elektra and the loss of his hearing, which means he can no longer be the Devil of Hell’s Kitchen.

Spending the next few episodes mostly sulking and being angry at God, you get the sense that this is supposed to be Daredevil’s ‘dark times’, but while he’s certainly not the man he used to be, the lack of action means it comes off more like he’s suffering from a resurgence of teenage angst than being actually tormented. Even the introduction of witty and bolshie new character Sister Maggie (Joanne Whalley) can’t spice up for these opening few episodes, although she certainly does her best.

While Daredevil is being all angsty and hiding out in a church basement, Wilson Fisk (Vincent D'Onofrio) is doing everything he can to secure the safety and freedom of his love Vanessa, and puts plans in motion for his own escape by slowly but surely blackmailing the FBI agents around him into becoming his personal henchmen. While I was apprehensive to see the return of Fisk - who made such an impact in the first season it felt like a bit of a cheat bringing him back for season 3 - it’s a delight to see the character in all his glory once again. D'Onofrio puts in another superb turn as the Kingpin, and he’s so intensely watchable that Fisk makes up for much of the shortcomings of Daredevil season 3 early on. In fact, his entire season 3 story arc is such a big part of why the show eventually returns to its season 1 standard that it raises questions over whether the Daredevil TV show can survive without its iconic villain.

The 25 best shows on Netflix you can watch right now

As for season 3’s new villain, Agent Benjamin ‘Dex’ Poindexter, AKA Bullseye (Wilson Bethel), it’s fascinating to watch his origin story unfold even if it’s not exactly true to the comics, and his troubled soul adds some much needed freshness to the series. His ‘super powers’, which could have come across as silly, are treated with such realism that it takes a while to register that you’re actually watching someone kill people by throwing expertly aimed inanimate objects at their jugulars. Thankfully, it doesn’t come off as ridiculous, and there’s a real sense of danger during his fight scenes. Showrunner Erik Oleson has talked about why he wanted to tell Bullseye’s origin story in this way, and it’s more than paid off, with Dex becoming one of, if not the, most interesting characters in Daredevil season 3. Bethel shows that he has the talent to play with the big boys in his first foray into the superhero genre and I’m pleased to see that his character will probably return should Daredevil get a fourth season.

Much like the series, the return of Fisk helps Matt find his way again and once he reconnects with Foggy Nelson (Elden Henson) and Karen Page (Deborah Ann Woll), the Daredevil we know and love starts to slowly reemerge. As his hearing returns, the action ramps up, but it still feels slightly forced, and the much-publicised one-shot prison action sequence from Blindsided (episode 4) - while an impressive filmmaking feat of engineering - feels fake and over the top. Although it moves the story forward and allows us to get away from the dull opening episodes, Daredevil season 3 is still a show that knows it’s a TV show at this point. It isn’t until Cox, Henson, and Woll are back together again that season 3 really hits its stride and The Devil You Know (episode 6) marks a true turning point in the season. If you’re looking for a fight scene comparable to some of the best from season 1, you’ll find it here as Fisk manipulates Dex into impersonating Daredevil and breaking into The Bulletin to kill a witness. The fight is a return to form for the series’ action scenes, but it’s really Dex’s chilling turn to the dark side which makes the episode so memorable.

The most exciting new TV shows coming in 2018

As Matt reconnects with his friends and family, there’s no stopping the series, with almost every episode from this point on knocking it out of the park. Often excelling when it focuses more on its secondary characters, the lack of Marvel-Netflix universe crossovers and cameos enables Daredevil season 3 to get back to what it does best as it develops its own characters rather than relying on star power and name-dropping. In Revelations (episode 9) we find out about Matt’s mother and what happened to her, while in Karen (episode 10) we, unsurprisingly, dig deep into Karen’s past and how her brother died, with the latter being one of the best episodes of the season for me.

There’s other character-building moments like this throughout the show - most notably, finding out about Dex’s upbringing in The Perfect Game (episode 5) - and every time, they’re bright sparks in the show, whether during the disappointing first half or the superb second. Henson and Woll are back on top form and give us lots of reasons to remember why Daredevil is nothing without them, and while Cox is limited somewhat by his drab storyline to begin with, by the end of the season, you'll be in awe of his performance. His confrontation with Fisk during the finale in A New Napkin (episode 13) is perfect in so many ways, but it’s the moment he rages at Kingpin with a painful brutality (“You don’t get to destroy who I am!”) that stays with me.

While the ending is a little too rosy, with everyone we care about getting their happily-ever-after and all the loose ends tying up nicely, it feels well earned. Daredevil season 3 is a rollercoaster of a journey for its characters, but also for fans of the show who weren’t sure what to expect after The Defenders; the final few scenes are like a balm to everything that came before, returning Daredevil to its rightful place at the top of the Marvel-Netflix pile. Yes, there’s still a few small sticking points, such as the fact that Elektra is never mentioned again despite Matt being supposedly torn up about her death at the beginning of the season, and for the love of God, it could have been three episodes shorter Netflix (the first three), but these are forgivable offences once you realise where it leads us - back to Daredevil. Back to a show worth talking about and one which could reach even higher heights in season 4… should it get one.

While Daredevil season 3 gets off to a painfully slow start, the Devil of Hell’s Kitchen eventually hits his stride and sees the show return to top form.