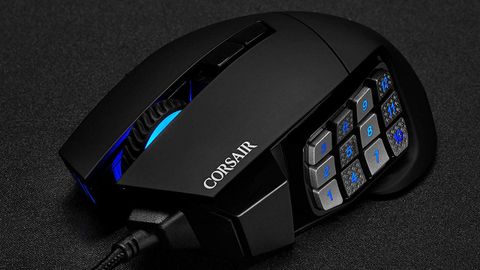 A solid upgrade to Corsair’s already good MOBA gaming mouse, although we think it still hasn’t reached its full potential.

Corsair’s original Scimitar gaming mouse, released in 2015 to the bafflement of many gamers, was a breath of fresh air. It wasn’t for everyone, and some critics derided it as a joke; an oversized, absurd contraption that nobody could use effectively. Fitting seventeen buttons and a scroll wheel onto a mouse chassis was a bold move. Five years later, though, and the original Scimitar is still on sale, with a lighter, faster big brother arriving on the scene; the Scimitar RGB Elite.

It’s not hard to see why the Scimitar series has held popularity - the rise of streaming and professional eSports has seen MOBAs and MMOs take on a whole new life, and the Scimitar’s twelve-button thumbpad is the perfect tool for gamers in those online arenas.

In comparison to the regular Scimitar RGB’s 12,000 DPI optical sensor, the Elite model has a cutting-edge 18,000 DPI PixArt sensor, putting it ahead of a significant chunk of the competition and providing incredibly precise control in games.

The programmable buttons are, of course, the real draw here, and they worked excellently once I’d spent some time mastering the little thumbpad. Two other buttons sit behind the scroll wheel, mapped by default to raise and lower sensitivity on the fly. Considering that the Scimitar RGB Elite only costs £75 (pretty par for the course among gaming mice), you get a lot for your money.

While the Elite has improved the Scimitar design in some areas, others sadly remain unchanged. The mouse still feels chunky, with a somewhat archaic (but robust) design. The rubber-padded rest that sits underneath the ring finger has a coarse textured pattern on it, which I found irritating after a long play session.

Real credit has to be given to the design of that multi-button thumbpad, however. The entire unit can be relocated within the cavity on the left-hand side of the mouse, allowing you to select the most comfortable position for you. The buttons themselves have alternating textured patterns on them, to aid in navigating the pad without looking. My only real criticism would be that the buttons themselves are quite small; a problem if you’re a ham-handed 6’3” titan like this reviewer.

As for the RGB lighting, it's tasteful - it emanates softly from the scroll wheel, thumbpad and Corsair logo. And if you’re the type who likes a consistent colour scheme, the lighting can be tuned in Corsair’s free iCue software.

In practice, the Elite was a bit strange to use. As one might expect, it was too clunky for first-person shooters and twitchy rhythm action games, but for MMOs or MOBAs? With a little time to adjust, I was using abilities and items left right and centre, faster than ever before. Having your whole skillset right under your thumb is powerful, removing the need to ever contort your hand to hit 8, W and Shift at the same time. It's instantly become a contender for the best gaming mouse, certainly when it comes to those genres.

The two primary buttons are satisfying to click, even if the scroll wheel feels a tad flimsy (a button to unlock the mechanism for super-fast scrolling would’ve been nice, perhaps). Overall, though, the user experience is undeniably pleasant. The Elite is an expertly made piece of hardware, right down to the durable braided cable.

To put it bluntly, if you play MOBAs, you need this mouse. That goes double for competitive gamers and budding Twitch streamers; the sheer amount of control that the Scimitar RGB Elite affords you over the mechanics at play in MOBAs and MMOS is a must-have.

If you don’t play those games, ask yourself: do you really need seventeen programmable buttons? Do you?

A solid upgrade to Corsair’s already good MOBA gaming mouse, although we think it still hasn’t reached its full potential.