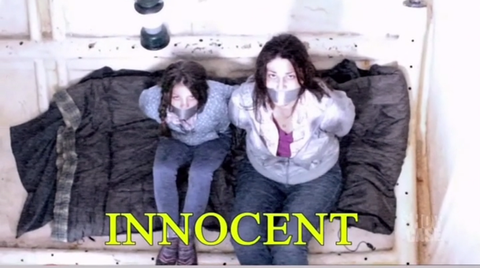 THE ONE WHERE It’s Julian’s trial and Liber8 are determined to see him freed, hatching a dramatic kidnapping plot to nobble the jury – all the while concealing the fact that they’ve really nobbled the judge. Meanwhile, Alec’s new beau, Emily, shows a killer side, Agent Gardiner actually helps for a change, and Carlos gets used to having a future-cop for a partner.

VERDICT First off, congratulations to Continuum for not only garnering a third season (we didn’t doubt it for a second), but also for virtually sweeping the board with seven huge wins at the Leo Awards (which honour the British Columbia film and TV industry). If the cast and crew weren’t a little bit squiffy on champagne for at least five minutes this week, we want to know why!

And so to this week’s episode, which did Continuum ’s usual stellar job of mingling action with drama and a few lovely character moments. Julian’s trial has been hanging over season two for a while now, so it’s almost a relief to see it underway – and naturally it’s no surprise that Liber8 would want to disrupt it. In a beautiful double bluff, Kiera and Carlos spend the entire episode trying to rescue the kidnapped wife and child of one of the jurors so that they can get a fair result, only to find out that the judge (citing a failure in police procedure) all but throws the case out of court. Their frustration at the verdict is palpable – Carlos looks like he wants to kill someone – and it’s a perfect illustration of just how much power and intelligence Liber8 have in the modern day. Sonya is a clever leader, although Travis is hardly a slouch, either, threatening rising political candidate Jim Martin to ensure he knows what Sonya’s up to. Plots within plots within plots...

While all this is going on, we get some fascinating flashes to the future, in which we see the elder Julian (aka Theseus) also facing a judge and receiving an unexpected verdict. The inter-cutting between the old and young men is wonderfully achieved and really rams home how dangerous Julian can be. He may be a sulky teenager now, but in the future he has an entire prison wing chanting his name. What on Earth will Julian do to become this notorious? And will it remain the same as the Julian we see in that flash to the future, or is history changing?

Elsewhere, it’s a genuine thrill to see Carlos and Kiera on the same page at last as they work together – and Carlos is even invited into Alec’s new Batcave! He’s truly part of the gang now. It’s fun watching Carlos boggle at everything Kiera does, but it might have been more interesting to show him struggling with the concept of her being from the future for a little longer. Still, he’s a pragmatist, and it does say a lot about how adaptable he is. Now the Kiera/Carlos/Alec dream team can work at full throttle, there is no bad in that.

WELL, DUH… Hmm, we’re not sure about the brain-power of the police department’s new boss. When Kiera and Carlos inform her that the jury has been compromised because a member’s family has been kidnapped, she instantly wants them to stop the trial. Kiera has to patiently explain to her that this would result in the victims being killed. Oh well, perhaps she hadn’t had her second cup of coffee that morning…

FAMILY MATTERS We’ve commented before about Alec’s lack of empathy for his mother, but this week it goes one step further. After an argument about lying in court, she apologises to him and says, “I love you, Alec.” She stands in front of him clearly aching for a hug, but he doesn’t so much as twitch a finger. A moment later his brand-new girlfriend wanders over and he hugs her without hesitation. Alec really does suck at “family”, doesn’t he?

COOL TECH Kiera uses her chip to analyse one of the jurors, realising that he’s extra-stressed and thus deducing that his family has been kidnapped. Most impressively, however, she hooks herself up to the Slice from the time-travel machine and becomes a human computer many times more powerful than before, scanning through blueprints of boats to find the kidnapped family. Impressive! ( And the way the Slice sparks a little is very pretty – girly note .)

XENA, WARRIOR GEEK! Is Emily genuinely infatuated with Alec or not? She seems truly delighted to hear him come home while she’s snoozing in his bed (he wasn’t in the room with her, so there was no need to act pleased), and yet she’s working for Escher. Either way, the violence she doles out to the intruder is extraordinary: she snaps his neck without hesitation. Poor Alec, though – who knows what this murderous new partner of his is up to?

FIGHT OF THE YEAR? One of Liber8’s henchmen gets into a brutal and bone-cracking fight with an invisible Kiera, and every single moment is utterly believable. The stunt work on this show is so good that even a fight with thin air is fab. Bravo! Also, Carlos’s reaction to Kiera vanishing is hilarious.

BEST LINES
Travis: “Mr Martin.”
Jim Martin: “What do you want?”
Travis: “The mayor in my back pocket would be a good start.”

Morgue attendant: “Agent Cameron. Never sneak up on someone in the morgue. It's, like, the number one rule.”

Continuum season two is currently airing in the UK on Syfy, Thursdays at 10pm