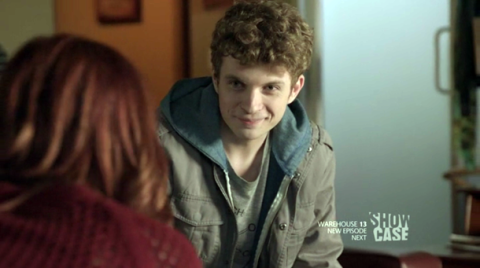 THE ONE WHERE Kiera thinks another time traveller has just arrived in Vancouver, but it turns out that they actually arrived in 1975… and the person in question is her old partner, Elena. Meanwhile, another suit turns up, Liber8 do some stirring and Gardiner makes a nuisance of himself.

VERDICT Rachel Nichols gives a sterling performance this week, using her character’s friendship with her future-partner-now-an-old-lady Elena to bring on some serious waterworks. Not only is she weeping for their lost friendship, their lost partnership and Elena’s death, she’s also mourning the loss of her son: brought home when she sees how happy Elena’s family are. There can’t have been a single person watching the final scene who wasn’t yelling: “Hug her, Carlos!” at the screen as she blubbed. Thankfully he did, which was also a symbolic way of ending the episode; she has a new partner now, after all. Although obviously he still doesn’t know the truth about her, poor sod. He may regret that hug one day…

Emotions aside, “Second Skin” is also notable for an amazing, breakneck, bare-knuckle, blood’n’all fight between Sonya and Garza. It’s excellently choreographed by stunt supremo Kimani Ray Smith, delivered with aplomb by the actresses and too fast for us to even screengrab. This season appears to be forming a trend: every episode, no matter what the content, will feature at least one knockout action scene. Long may it continue!

Stargate Universe ’s Patrick Gilmore brings a lot of goofy charm to the role of the guy who unwittingly purchases Elena’s old suit and falls foul of Liber8 (both factions). He effectively goes from zero to hero in the space of a few minutes, although the poor bugger gets the crap kicked out of him by Travis for his troubles – for a minute there it looked as though Travis had killed him, so it could have been worse! Continuum also throws in a sci-fi-themed gay wedding, which is pretty cool, although for the millionth time pesky copyright laws mean that nobody’s allowed to say “ Star Trek ” or “ Star Wars ” and a brand-new series is made up to replace them. If we had a penny for every time a show or a film has done this… Sigh…

EXPLOSIVE BEHAVIOUR Garza gets to blow up a petrol tanker, which – from the look on her face – appears to be her favourite thing in the world. One issue, though: given the size of the tanker and the distance at which she’s standing, she probably should have been obliterated.

COOL TECH We see a training session in the future in which Kiera identifies criminals standing behind a wall because of their thermal signatures. You could never play hide and seek with a Protector, could you?

IT’S WOSSISNAME! Anyone who watched Caprica should instantly recognise Alec’s new beau – Magda Aponowicz played Lacy on the series. Whether she’s been brought in as Emily to simply play Alec’s new girlfriend, or whether she’s got an agenda, is yet to be determined – but his tongue-tied goofiness around her is very endearing.

BOO, HISS Gardiner really is a royal pain the arse this week, following Kiera around in an attempt to uncover another super-suit, and actually trailing her to the hospital to visit the ailing Elena (whose “Who’s the asshole?” once his back is turned is hilarious). The threat he poses to Kiera is brilliantly signalled in one scene in which he sits on desk as she talks to Alec – he’s clearly listening in, and she’s clearly getting twitchy. Thorn, meet side.