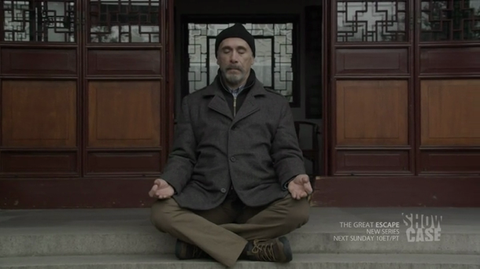 THE ONE WHERE A scientist is murdered over an antimatter machine, Kagame turns up in 2012 and Kiera and Alec finally meet.

VERDICT For the third week in a row Continuum has Kiera and Carlos investigating a case that fails to live up to its premise. After a fantastic set-up – a weapon drills a hole through its victim as well as five storeys of the building (shades of Alien and its acid blood there) – the rest of the plot moves away from the cool stuff and focuses on a fight for the patents to the technology between the victim and his partner. Yawn! Still, there’s a fun twist at the end when Kiera realises that the killer will take the technology she’s stolen and use it to create clean fusion in the future, making the world a better place. And the moral quandary of her letting the murderer go is cleverly prodded by Alec, who observes, with remarkable insight, that Kiera is essentially playing God. Mmmm, juicy…

Away from the unfortunately uninteresting antimatter story, we have the arrival of the ever-reliable Tony Amendola as Edouard Kagame. He’s perfectly cast: an affable old man on the outside, ruthless killer on the inside. Notice how he barely bats an eyelid when Travis rescues him by holding a baby hostage – he’s a right bastard who surrounded himself with other right bastards. The actions of Liber8 have been a little disjointed up until now (with the emphasis on “joint”, given that we see Travis and Sonya enjoying some recreational drugs this week) but now their leader has arrived they should be kicking things up a notch. Check out the “best lines” at the end of this review for proof.

Continuum has been airing for long enough now for some themes to be developing, and the main one appears to be “trust your gut”. Carlos, echoing a similar sentiment in episode two, tells Kiera: “You watch and you calculate. Which is a good tactic, but I think you should trust your instincts a little.” Later, with her suit out of action, Kiera does – and reveals that it “feels good”. (It’s ironic, then, that Alec and his Amazing Computer Barn are still such a huge part of the show when she's not supposed to be trusting technology…)

One other thing: the first meeting between Alec and Kiera is a little disappointing. After all he’s done for her, it would have been nice if she’d offered to buy him a pint – instead, he has to break into her hotel room to say hello. There’s gratitude for you.

OH, CANADA
1) There’s a sign stencilled on the wall of the Vancouver Police Department set that says “Beyond The Call”. This is the motto of the actual VPD.
2) The Japanese gardens where Kagame arranges to meet up with his cohorts is the Dr Sun Yat-Sen Garden , a lovely oasis of zen in the middle of Vancouver’s Chinatown. It’s also been featured in other shows, including Smallville and Fringe.
3) Inspector Dillon says “lieutenant” and pronounces it the British way, ie “leff-tenant”. There’s a rarity!

TRIVIA We mentioned this before in a Spurious Award elsewhere in the site, but the see-through screens of top-secret criminal investigations positioned right in front of a window is a rather dumb idea!

BEFORE AND AFTER There's a fantastic FX sequence which has Kagame watching a street as, in his mind's eye, it turns from 2012 Chinatown to 2077 Chinatown. Impressive.

COOL TECH The chip in Kiera’s head measures people’s bodily reactions to see if they’re lying. Her suit, meanwhile, gets a little explanation – it can regenerate itself like living tissue.

OH, THE HUMANITY! Either old geezer Kagame is so proficient in fighting that he can take down the young and fit Kiera without breaking into a sweat (highly unlikely)… or he’s had his body fiddled with like the rest of his super-soldier team.

BECAUSE SHE’S WORTH IT! Kiera mentions that in 2077, mascara wands apply makeup to eyelashes using an electrostatic charge. Okay, so there’s not much clean water or food in the future, but at least you’ll always have fabulous lashes.

IS IT JUST US…? Or is it ridiculous that people in TV shows and films who are trying to hide from the police always look shifty, turn up their collars and walk away quickly? Kagame does it in this episode when he sees a cop, but it’s a cliché across all film and television. A better thing to do would be to smile at the law enforcement official and wish them a nice day. That’d fox ’em.

BEST LINE
Kagame: “There’s a war coming.”
Sonya: “How can you be so sure?”
Kagame: “Because we’re going to start it.”