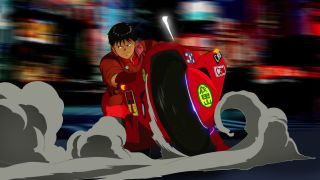 Rumblings of a live-action Akira movie started over a decade ago when Warner Bros. scored the rights to the popular manga series with hopes of producing an American remake. Tons of directors have been linked to the project over the course of its lengthy development, but so far, still no movie. The original series and 1988 anime feature take place in a post-WWIII Neo Tokyo where two estranged friends rally against government experiments.

One of the first filmmakers to get involved was Ruairi Robinson (The Last Days On Mars) who shared a bunch of concept artwork giving us an idea of how his vision would have taken shape. Rumors that the movie would take place on US soil appear to be false. Looks like Neo Tokyo's still the location, but Robinson's vision also included a couple of American actors Chris Evans and Joseph Gordon-Levitt. Take a peek at some of the best pieces below:

Neo Tokyo looks as you might expect; a Blade Runner-esque landscape of lurid neon signs and grimy backstreets. These designs don't stray too far from the original anime, except of course, in the casting of its two leads.

Evans was originally eyed to play Kaneda, the leader of a biker gang, who attempts to save his former friend from the clutches of an evil experiment. That's who Gordon-Levitt would have played, the sorta-villainous Tetsuo. Both look badass decked out in the full character garb. Too bad we'll never see them battle it out under the glow of that post-apocalyptic metropolis.