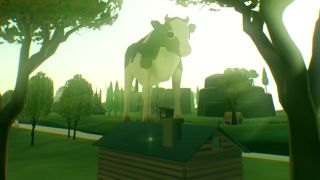 If you haven’t gathered this from the title of this article by now, Everything is based around the concept that you can be anything in its world. Rolling around as one object before deciding to either ascend to a bigger thing (trees, buildings, planets) or descend into a smaller thing (plant matter, atoms, or even time/space units), collectophiles will love it. Every time you find something new to be, a notification pops up telling you just how much you’ve discovered in the animal category, or fungus category, or 3D category...it goes on for a while. I decided to roll up my sleeves and test just how many things I could be.

Let’s start with the basics: a tree on an alien planet. Neato.

Entraine - kind of like a gazelle. An alien gazelle? Whatever, I’m going to just go with it.

Wait a second...either this entraine is tiny, or the blue roach is MASSIVE. Please dear lord make it the former.

I decide to make some trees and rocks have a little shindig. Look at them go!

Pollen. Hmm, ok. Not bad, Everything.

But who wants to be an alien continent when you can be a...PLANET. BOOM.

Ahem. Planet to a humble vase is quite a transition to make. I was suffering from delusions of grandeur until now.

Now I’m a majestic speeding duck that sits up straight and glides through the water. Without moving its feet. Hey, you do you, motherducker.

I’d be a lot more pumped up to be a tiger if it didn’t blink so derpily and move around like a lego brick.