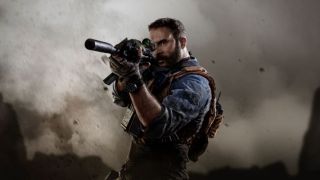 Call of Duty: Modern Warfare's elusive battle royale may be closer than we think. Reddit user Nateberg3 posted a 30-second video showing what could very well be the massive map necessary for a battle royale mode, even though Infinity Ward have yet to confirm the mode's existence.

The video shows the player experiencing a glitch that has them suspended high above the Spec Ops map Verdansk. From their birds eye view, Nateberg3 was able to slowly rotate the camera and take in what looks to be a large map extending beyond the ones we've already seen before - the Spec Ops map and the new Ground War map Port of Verdansk. Check out the video here.

While there's no confirmation from Infinity Ward that a battle royale mode is even in production, this video and the earlier data mine seem to point toward its eventual existence. We can't be sure until we hear it from the developers, though, so stay tuned.

Just in case the battle royale is on the horizon, you might want to brush up on your quick scoping skills. Check out our Call of Duty: Modern Warfare tips to get you ready for the biggest fight to ever hit the game.