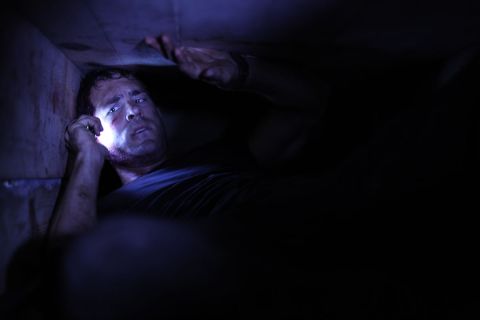 “I love it,” said an anonymous exec, “now, how do we get the film out of that damn box?” As unyielding as the coffin it takes place in, Buried offers no such respite.

From Poe to Tarantino, Dante’s Inferno to Wes Craven’s The Serpent And The Rainbow, premature burial has a stellar fictional pedigree, but no one’s had the stones to go this far before.

With little more than one actor, a mobile phone, a (very full) Zippo and a few disembodied voices, director Rodrigo Cortés has created a 95-minute panic-attack-made-movie.

A truck driver kidnapped by Iraqi insurgents, Paul Conroy (Ryan Reynolds) wakes in hammering blackness somewhere under the desert. We hear his tortured breathing for a full minute before we see him, reflected in the Zippo’s fragile flicker.

He calls his loved ones, his boss, the FBI; encountering jobsworths, hold music and interrupted signals at every turn. The message is clear: you’re totally, utterly alone.

Though Reynolds has his detractors, chiefly because he often plays gobshites, he’s brilliant here, pleading, wailing, cracking up, not to mention dropping a c-bomb on his mother-in-law.

Never losing sight of the human story at the centre of its fiendishly high-concept trap, the film recalls John McClane’s hilarious, heart-rending, distress calls in Die Hard (“Do I sound like I’m ordering a fucking pizza?”).

Reynolds runs the full gamut of emotions from sarcasm to apoplexy – something anyone who’s ever phoned a switchboard will sympathise with.

The biggest surprise is not how viciously Chris Sparling’s screenplay turns the screws on poor Paul, but how furious it is – at the Americans, the Iraqis, the senselessness of young lives wasted in an unholy war.

“I didn’t expect it to be like this,” says Paul to his military contact Dan Brenner (Robert Paterson). Worse still, Conroy’s HR director (veteran ‘That Guy’ Stephen Tobolowsky) is more concerned with company protocol than saving his life.

Except for the odd blip (a moment of contrived peril that seems to have slipped in from another film), the anxiety mounts organically to the point where it feels medically necessary that the camera crane away at the end of each act, stranding Paul in his wooden eternity.

Like him, you’ll be praying for daylight, deliverance – anything to get out of that box.