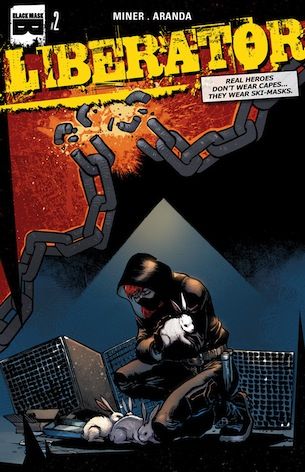 Black Mask is having a hell of a debut year. As well as the excellent Occupy Comics, its launch titles include supernatural grindhouse noir 12 Ways To Die , demented science fiction thriller Ballistic and Liberator . Liberator is one of the most interesting, taking the standard superhero idea of a lone crusader and marrying it with the animal rights movement and, specifically, Dog Rescue. Author Matt Miner is an active Dog Rescuer and his experience adds a welcome dose of realism to the increasingly frantic adventures of the lead character.

Damon Guerrero is a liberator, an animal rights crusader who spends his days working at a coffee shop and counting the minutes until his next job. Damon is endlessly principled, incredibly compassionate and has a hair trigger. He reacts, instantly, to anything which seems to be injustice and that’s already got him into trouble once. Even worse, Damon’s bored with pretending to be someone he isn’t. He only feels alive when he’s working, he’s starting to work more and people are starting to notice…

That idea is at the centre of the book as a whole, and this issue in particular. In the space of one instalment, Damon is not only approached by a shadowy organisation who’ve become aware of his work but he gains a partner. Jeanette, a friend and fellow activist, realises that Damon is targeting something important to her and volunteers to come and help. It’s an interesting idea, a ski-mask and hoodie approach to superheroes that not even Kick-Ass reached, but it really works. Jeanette is driven by the animal testing done at her old lab, which led her to quit. Damon is driven by his endless sense of social justice. They’re driven in the same direction and even joke about it being a “superhero team-up”.

This unusual approach is balanced by a growing sense of danger. The animal experiments that drove Jeanette away are briefly, but horrifically shown and Damon’s response to the lab is just this side of proportionate. There’s a sense of things starting to move faster than the characters would like and the end of the issue confirms that. Damon’s arrived, but that may not be as much fun as he was expecting.

Miner’s script is smart, character-driven and pacy whilst Aranda, Pereyra and Delsante give the book exactly the feel it needs. This is a story about real people and whilst they wear ski masks, none of them can fly. These characters are utterly human and the art never loses sight of that; Aranda’s character work consistently some of the most impressive I’ve seen. Likewise, the colour work on the night scenes especially is amazing.

Black Mask is having a hell of a debut year and this book is one of the reasons why. It’s intelligent, grounded and morally ambiguous in a way that few books manage. Damon and Jeanette want to be heroes. Seeing if their world lets them is going to let them looks set to be fun, nasty ride.