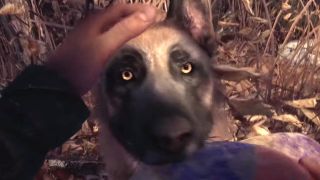 The Blair Witch game is a prequel to the 1999 film that started the "found footage" horror craze, and it improves on that formula in the only way possible: by adding a dog. We got a quick teaser of the new game from the developers of Observer and Layers of Fear at E3 2019, and now a new gameplay video from Game Informer gives us a deeper look at the first-person horror game and the many ways it incorporates your canine friend Bullet, an indispensable assistant as well as good company. I swear to God, if anything happens to that dog...

You can pet the heck out of your dog

It's getting more and more common for games to let you pet the dog, but Blair Witch lets you really go hog wild on your pup. Here we see ear massages, head pats, and tummy rubs all in one smooth motion. This is truly next-generation dog petting.

Your dog's mood will tell you about the environment

Your dog has a good dog head on his good dog shoulders. If he's whining and walking around with his tail between his legs, that means he's scared, and you should be too. Granted, dogs are also scared of things like stairs and screen doors, but Bullet probably won't have too many of those to freak out about in the woods.

Your dog can go places you can't

Science fact: on average, most dogs are smaller than most humans. You can capitalize on this knowledge by sending your trusty companion in to tight spaces to fetch things for you. Fortunately, he always knows exactly what object you're referring to when you say "get it!" and will never bring back a dead rabbit instead.

Your dog will track monsters by barking at them

Blair Witch makes some concessions to video game-ness by populating the woods with freaky monsters that serve the eponymous witch. You can drive them off by keeping your flashlight trained on them, but first you have to find them. Thankfully, Bullet's pretty good at that. He'll stand guard and bark at the last place he heard or saw them, giving you a hint of where to keep your light pointed.

Your dog will point out key items, also by barking at them

Nothing worse than walking for 10 minutes then having to turn around and walk more because you missed an important item, right? Bullet ain't gonna let that happen to you. He'll alert you to items that are important to your investigation, like articles of clothing or - especially important here - a discarded camcorder.

Find more immersive, interactive scares on our list of the best horror games of all time.