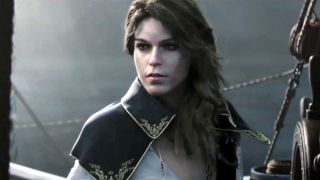 If you were one of the many people who wished you could play a whole game of Assassin's Creed 4: Black Flag with just the pirate parts, Ubisoft's E3 2017 press conference had your answer: Skull and Bones. The pirate combat game was a surprise announcement and it got quite a reaction from the crowd online. Here's what they had to say.

Now you have my attention #UbiE3 pic.twitter.com/HAIFl2cumQJune 12, 2017

Feelings were mixed about Skull and Bones' multiplayer focus

Sea of Thieves comparisons were inevitable

Skull & Bones sounds more like For Honor Pirates than an adventure game like Sea of Thieves? Wonder which will sell better. #UBIE3June 12, 2017

Seems like pirate games are becoming the new trend. I have no complaints though. Personally, I'll take them over another zombie game.June 12, 2017

Sea of Thieves and Skull & Bones both look ambitious and interesting in drastically different ways, and that's great for everybody. #UbiE3June 12, 2017