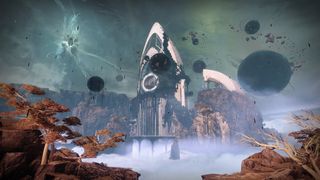 Your teenage Axe body spray habit and climate change mean that when we retire, all of the planet's beauty spots are likely to be smoking craters or 200 feet underwater. As such, team GamesRadar+ has been forced to dream of a mythical retirement in the game lands they know so well. We asked, while holding up a giant atlas of fictional gaming lands, where they would want to live. This is the latest in a series of big questions we'll be interrogating our writers with, so share your answers and suggestions for topics with us on Twitter.

This might sound a bit strange, but sometimes in the hubbub of work and socializing, I love to sit down with No Man's Sky and a pair of headphones to just drown in its pastel-shaded planets. I've spent a long time building up my base on a particularly sunny planet, filled with flora and fauna, and just enough water for me to have an underwater base. It's basically idyllic, and if I could transport myself there somehow, I would in the blink of a laser mining tool. Even blasting into space in my little spaceship - nicknamed The Bumblebee because of its bountiful booty - with all the stars whizzing past the windshield would feel quite tranquil too. Just avoid the space pirates and all the weird things that want to eat me and everything would be fine. Thankfully No Man's Sky VR is mere months away, so at least I can get close to my peaceful idyll sooner than expected. Sam Loveridge

Not gonna lie, part of the reason I want to live in Midgard is because there's so few people wandering around it in God of War. With most of its inhabitants having fled the hostile climates of the forest near where Kratos and Atreus live, it's really quiet and relatively safe with the two of them adventuring through it. Maybe I'd even glimpse them striding through ruins, making me little more than an NPC... actually, I'm OK with that. Yeah, I'm definitely romanticizing living in a Viking land, but the idea of being so close to magic and even potentially being able to wield it myself is too good to pass up. I'd just have to stay out of the way of Helwalkers or giant chained-up dragons, but I reckon I could manage that. It would be a small price to pay to be in a world steeped in mystery and wonder, plus no one would bat an eyelid at me having a sword and shield on my back when I'm wandering through the wilderness. Unlike today, where apparently it makes people "uncomfortable" and "anxious." Cowards. Zoe Delahunty-Light

While there are probably more interesting places to live in terms of monsters or magic, I’d have to pick something in Deus Ex world. Robot brain enhancements, neural net powered healthcare, and battery-powered lifespans beats big lizards and abracadabra problem-solving any day. Obviously I’d want to go there before all the bad stuff happens and live in one of the posh areas rather than the cyborg slums, but this is my fantasy life so that’s a given. I think I’m saying I want to be a semi-immortal, cybernetically enhanced near robo-god with my brain jacked into 5G WiFi, and I’m basically very angry the real world hasn’t caught up with this ambitions and made it happen yet. Leon Hurley

Sure, it's about as cliche an answer as they come, but anyone who's spent a few days in the realms of Kalimdor, The Eastern Kingdoms, Northrend, or Pandaria can relate to the attractiveness of a permanent life in Azeroth. Let's be clear; were Blizzard's fantasy universe a real place, I would not be the adventuring hero that my Gnome Warlock suggests I am. Instead, I can see myself spending my youth as an urban resident of Stormwind, taking summer vacations on the coastlines of Ahn'Qiraj here and there, before settling down further north in the Jade Forest, enjoying most of my retirement at a modest holiday home situated on the serene plains of Nagrand. Azeroth has a reputation for being a dangerous place, but look closer, and you'll find plenty of great spots for a quiet, comfortable life. Alex Avard

OK, OK, the Dreaming City has a few problems. A Taken curse, a Scorn infestation, a Hive brood, an all-seeing wyrm hellbent on invading and presumably consuming the entire world - that's a given. Maybe knock a bit off the rent to compensate. However, just look at those buttresses. I don't know if it's because I wanted to be an architect before I realized it involves so much math, or because I took several art history classes in school, or because Bungie's art team is just on another level, but I adore the architecture in the Dreaming City. It's my favorite destination in all of Destiny, bar-none. Hell, it's one of my favorite environments in any game I've ever played. I love the contrast between the dark stone and the vibrant greenery. I love the massive halls and imposing statues which make it feel genuinely epic. I love the music that lends everything an ancient, mystical quality. As far as I'm concerned, the Dreaming City is everything Destiny should be: a gorgeous mix of sci-fi and fantasy that just screams space magic. Put it in my veins. Austin Wood

There's blood in the streets. The many, discarded in mass graves strewn about the city; the few, clinging onto what little hope remains. It's dangerous to walk alone at night. Even the perpetual shadow that has befallen the once-great capital has become enveloped in a thicker, more inconceivable type of darkness – our fear made manifest for all the world to see. Some brave survivors pack into the taverns, listening through tears as disgruntled landlords discuss alcohol shortages – oh, the horror. There are food shortages too; it's become a part of the package, along with medicine, clean clothing, and resources, that is being pumped towards the frontlines of the Great War being fought on distant European borders. So delirious the people have become in this state of being, they begin to believe in whispers that the dead are rising to live once again, all at the behest of a secret cabal of powerful people that escaped from the old world born anew.

It's because of all of this that I choose to live inside Vampyr's nasty AF simulation of London circa 1918. Sure, it's infested with filthy vampires. And yeah, it's lousy with crime, contracting the Spanish Flu sounds legitimately awful, and don't even get me started on all the dodgy British accents I'd have to endure on a daily basis. But it sure as shit beats that cheery vision of post-Brexit Britain that I just painted for you, doesn't it? London's calling, bay-be! Josh West

The Asura love a giant cube. They enjoy dirty great tetrahedrons, too. However, they like these shapes best when they float for no obvious reason. Or glow. Both, if possible. Floating, luminescent geometry is the good s*** if you’re a gnome in Guild Wars 2, I suppose.

Suffice to say, the Asura city of Rata Sum is beautiful - particularly at night. Jungle vines creep over ruins which float beneath a sea of stars. Holograms twinkle from the gloom within. Tunnels wind downward like a futuristic beehive. Better still, it’s riddled with neon plantlife ripped straight from James Cameron’s Avatar. Despite paying gravity and guard rails no mind at all (seriously, there’s nothing stopping us from falling to our death here), it’s a lovely place to be. That’s why I’d pick it as my digital home; it’s as interesting as it is comforting. Because the oddball Asura live here, this is also one of the quirkiest areas in all of Guild Wars 2. You’re guaranteed a laugh. I honestly can’t think of a better place to kick back and relax. Benjamin Abbott

Settling down in the pleasant landscape of Ferelden’s Hinterlands region of Dragon Age: Inquisition would be a no-brainer. It’s got lush forests, sturdy forts, a functioning town, and fertile farmlands. Perfect for a country bumpkin like me. And by the time the Inquisitor arrives, it's only getting safer with each fade rift that gets closed, every camp that gets established, and each magical farm animal that gets retrieved. I like it so much that I know the specific property I’d want to live in, too. The Grand Forest Villa is in the southwest corner of the area, and was clearly designed by Ferelden’s Frank Lloyd Wright: it’s grand and spacious, has splendid landscape views, and comes with a formidable build and safe positioning to boot. Where do I sign? I know there’s a literal dragon in the area, but that’s at the opposite end of the map so I reckon that’s fine... might make a trip to the shops in Redcliffe a bit tasty until it’s banished, though. I’d also have all the other other regions of Ferelden on my doorstep, but even before venturing out to those interesting regions, dropping anchor in the Hinterlands would be a great means to carve out a country life in a picturesque land. Rob Dwiar