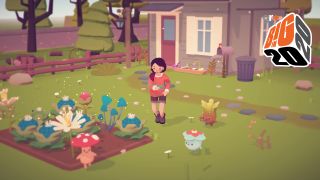 With all of the noise and chaos life can bring, there's something so comforting about the prospect of Ooblets. Equal parts adorable and goofy, Ooblets exudes a kind of cosy energy that welcomes you in with its cutesy creatures and brightly coloured world.

Development team Glumberland studios is working to bring us a farming-life sim on PC and Xbox One with elements of creature collecting. And with every devlog the team posts, the thought of jumping into the world of Ooblets gets all the more exciting. Outside of its endearing style and humorously named creatures, the many different systems and mechanics that make up the world of Ooblets look set to bring us an interesting take on the genre that's uniquely its own.

With farming elements that might remind you of Harvest Moon or Animal Crossing, and creature collecting that brings to mind the likes of Pokemon, the creators behind Ooblets have called upon these games as some of the their influences, but the quirky style and distinctive charm of Ooblets make it standout as a game very much on its own unique path.

"I think we started out following more well-trodden paths but quickly ended up going in our unique directions," Ooblets' designer and writer Ben Wasser explains. "We take influences from a lot of other games, but I think people would be hard-pressed to see Ooblets as derivative of any specific thing once they get their hands on it."

The quirkiness of Ooblets is undoubtedly one of its biggest draws and also helps it stand out in an ever-growing genre of farming sims. From its humorous glossary of terms for all things Oob-related, to the names and designs of the Ooblet creatures themselves, it's almost impossible to resist being charmed by the friendly and approachable world Glumberland are creating.

"The design and overall feel of Ooblets is a mixture of the things we love, our own personalities, and a bunch of technical shortcuts," Wasser says when asked about the design of the game. "We've got a see-what-sticks attitude where we don't constrain our ideas too heavily. Usually if we come up with a dumb little idea and if it makes us laugh, we say sure let's try it out and then it becomes a core part of the game that some fan will eventually end up writing a lengthy wiki article about."

One idea that stuck was the dance battle system. Not only is it one of the most interesting ideas in the game, it's also something that came about as an absolute accident. "The dancing happened by accident, mostly," Wasser tells me. "In the early GIFs and videos we posted, we'd often set the characters to dance just to make things feel more lively. Eventually, people started associating the game with dancing but we didn't actually have any dancing or gameplay related to dancing in the game."

In Ooblets' setting of Badgetown, as Wasser explains, your access to things will sometimes be blocked by characters, and you'll want to "settle scores through dance battles" to progress. It's also a clever way that the team is able to avoid violence. "We were also feeling generally weird about traditional fighting with respect to the cute creatures you grow and befriend, so we figured we could kill two birds with one stone by switching battles over to dancing. Now it's a core aspect of the game and you're not leading your adorable pals into dog fights."

This shift away from traditional fighting makes a lot of sense when you consider the central themes in Ooblets are friendship and kindness. Everything about the game gives off a friendly, cute vibe that definitely seems better suited to having a happy jig than a violent face-off.

In Badgetown you'll also be able to interact with the townsfolk and befriend them. Glumberland is currently "fiddling" with a friendship system that's based on how often you talk to people, as well as gift-giving, and a few other aspects. "We're hoping people will also want to explore the characters for the sake of getting to know them," Wasser says, "since they add a lot of flavour to the lore and world."

We could always do with a little more kindness in this world of ours, and Ooblets promises to deliver it in the shape of a charming farming sim, wrapped up in a delightful world of lovably goofy creatures. Topped off with interesting features and quirky mechanics, Ooblets looks set to carve a path of its own in a genre filled with other much-loved games.