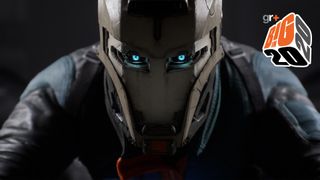 Disintegration isn't your typical FPS. In fact, there's a pretty good chance that you've never played anything quite like it. The fundamentals are recognisable enough, of course. You've got tight first-person action, there's a light smattering of real-time tactics, and a neo-apocalyptic sci-fi aesthetic, all packed into multiplayer maps specifically designed to bottleneck you and your buddies into chaotically contested hotspots. But it's how Disintegration takes these disparate elements and slots them together that threatens to set it apart from the raft of shooters looking to leave a mark on the genre in 2020.

That's the goal for developer V1 Interactive, at least. As environmental artist Blake Low explains, the new studio "wanted to build a first-person shooter that was unlike anything that you've ever played before [...] combining visceral FPS action with real-time tactical elements." That's easier said than done in this competitive landscape, but there's certainly a lot of promise in such an endeavour. Disintegration is one of those rare games that – despite being a little rough around the edges at this early stage of development – shows a lot of promise and, more importantly, a lot of room for growth.

One of the key elements that sets Disintegration apart from the pack is the GravCycle, a unique aerial vehicle that specialist pilots use to navigate the battlefield. There are a variety to pick between, each equipped with a different combination of armaments and proficiencies. Some GravCycles are better in offensive situations, for instance, while others are more suited for crowd control or holding down important defensive locations. Finding one that suits your playstyle is integral, especially as Disintegration's combat comes at you fast and furious, with other player-controlled GravCycles whipping into firing-range from any and all angles.

Like in Overwatch, ensuring that your team has a balanced composition is an important piece of the puzzle, but it isn't the be-all and end-all. Truth be told, it's the players that can quickly wrap their heads around the strategy side of Disintegration that will find the earliest success and easiest enjoyment from multiplayer. That's thanks to one of Disintegration's key traits; the ability to directly command a squad of three AI-controlled troops – your Crew – from the pilot seat of your GravCycle as it hovers a few feet off the ground.

"We had to figure out how to do that in a way that's really fluid, so that it works seamlessly with the player's actions," says Marcus Lehto, the Disintegration's creative director, also credited as one of the co-creators of both Halo and its enigmatic hero, the Master Chief. "We treated commanding [your Crew] almost like firing a weapon in first-person. So you're firing off command call down on the ground to tell your units to move autonomously to locations and to take up positions of cover," he continues, admitting that getting used to this novel control scheme "takes a while, but when you start figuring out the finer tactical elements of it you can really wreck the enemy, which is pretty cool!"

"Do you want to do high-damage and cause a lot of mayhem; do you prefer to pester and cause distractions, do you prefer to get yelled at by your friends because you're trying to be a support player? There's probably a Crew in here that matches your play style," Low tells me.

This is just one of the reasons that commanding troops shouldn't be treated as an afterthought, but rather a core component to the game. The AI ground troops are the only units on the battlefield that can interact with or move the Reactor Cores at the heart of the game's signature PvP mode, Retrieval.

"It's a five versus five, objective-based mode where players can choose different crews, each of which has its own personality and style of play," Low continues. "The attacking team is trying to capture and deliver the Cores into the defending teams' area. It's like Capture the Flag, but instead of running it back to base you need to take that flag directly into enemy territory."

It's a fun mode that works to Disintegration's strengths, highlighting the focus on aggressive combat and simultaneous squad management and deployment. With 10 player-controlled Pilots all locked into GravCycles, each with their own squad of troops to commands, it gets pretty chaotic, pretty quickly. This is what Lehto is aiming for with Disintegration's multiplayer, not only with the Retrieval, but in the full suite of game modes that will be available when the game launches later this year. "We wanted to make sure that the player always feels like they've got the agency to do something interesting."

There's still a lot of ground for Disintegration to cover, but there's certainly something here that should excite fans of fast-paced shooters. It's a fresh idea with clever execution, a new IP fighting for ground in a highly contested genre. When it takes off later in 2020 it will do so with a comprehensive multiplayer offering and a full single-player campaign, and it's certainly one to watch as we push deeper into the year.