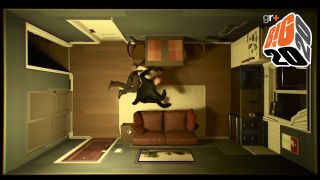 2020 will be the year of many things, not least one in which the home will become more sacrosanct than ever. Hermetically sealed shelters shut off from the white noise of the outside world, these central nodes of domestic life are living monuments to our universal desire for comfort and privacy, and when someone violates that space (or, worse, turns it into a crime scene), it's the modern equivalent of temple sacrilege.

12 Minutes is fascinated with that human fascination; restricting the play space to nothing but the mundane confines of a city apartment, and presenting it as the centre stage for a mind-bending murder mystery.

You play as an unnamed co-habitor of said apartment, returning from a day at the office to spend some quality time with your wife. Unfortunately, those modest intentions are about to be significantly upended, not least by some unexpected news, a potential home invasion, and the revelation that you're stuck in a seemingly unending time loop.

Through simple point-and-click gameplay, it's your job to figure out how to escape this recurring nightmare, and peel back the layers of its Kubrickian mystery to discover the dark, psychedelic secrets at its centre.

"12 Minutes is a study on how we interpret accumulated knowledge, and how we decide to use it based on our own moral compass", explains Luis Antonio, game director of 12 Minutes. "I tried to focus on a theme and setting that allows this to happen in the most distilled way possible. I guess you could say it's about trust and the idea of whether people can change."

12 Minutes, due to release later this year, has been in the works for close to half a decade under Antonio's singular vision, which represents his first original project following impressive stints at Rockstar, Ubisoft, and helping Jonathan Blow bring The Witness' geometric island to life as its lead artist. 12 Minutes made a strong impression at E3 2019, with a dramatic trailer on the stage of Microsoft's press conference, sandwiched between the likes of Cyberpunk 2077 and Halo: Infinite.

"After the reaction to that trailer, I worried that the [E3] build of 12 Minutes would not live up to expectations," he says, adding, "So I was really happy when every single person who tried the game at E3 enjoyed it, and felt it lived up to what the trailer proposed. It gave me a lot of motivation and confidence that we are doing something unique and worthwhile."

Indeed, having been one of the lucky few who got to play the game for myself last year, I can confirm that 12 Minutes is as intriguing and absorbing as its marketing promises. The brevity of that titular period allows the game to explore multiple timelines within the same confined space, presenting failure as just another stepping stone to future success. You can get yourself killed before those 12 Minutes runs out, for example, but doing so may alert you the presence of a fatal trap that can now be avoided well in advance of its arrival.

Antonio and his small team of contracted developers owe an unashamed debt to late 20th century cinema with 12 Minutes' atmosphere-drenched style, but he also points to a number of equally bold and smart indie title as crucial for paving the way before it.

"Games like Storyteller, Papers Please, and The Witness have helped me question unconscious game design decisions we often make, and develop a greater awareness of all the tools at my disposal when designing the experiences," says Antonio. "Others, like Limbo, Inside, and Every Day the Same Dream showed me how the interactive medium can be as strong emotionally as films or books without having to rely on technically complex productions and graphics."

Indeed, 12 Minutes flat textures, faceless character models, and dingy lighting may not make it the best looking title of the year, and there's still work to be done when it comes to endowing its core cast with believable animations and voices, but the game is already succeeding at doing a lot with a little. Interactive groundhog days are hardly new to the world of video games (in a sense, they've been a part of most of them since the first "Game Over"), but I'm intrigued to see where 12 Minutes takes its Rubik's Cube narrative in 2020, as should anyone with a taste for the butterfly effect.