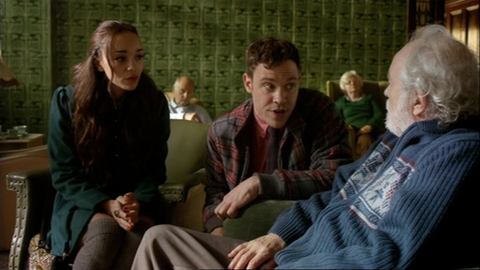 THE ONE WHERE A lovestruck ghost has it in for a Casanova ex-squaddie, and Kate suspects her dad has been incinerating her friends.

VERDICT This is undoubtedly the best episode of the show so far, and so nearly steps up to four stars, but it still doesn’t quite make it. Once again it was the main ghost of the week plot that let the side down. There were some great spooky moments to be sure (though perhaps none as spooky as Kate’s first dream sequence which was downright freaky) and the ending, with Mark croaking, was the kind of shock that the show needs every now and then to convince you it isn’t going to become formulaic. But the ghost’s MO is too familiar from previous episodes, and the cryptic messages (whether by phone or written in blood) are already becoming one of the show’s clichés. You kinda half-wish Jed had just said, “Nah, not gonna bother replastering that wall. The writing’s only going to come back,” in bit of Buffy -style self-awareness.

But the arc plot manages to keep on taking intriguing turns. It’s looking more and more likely Warren is Jed’s dad, but did anybody see the gang rape twist coming? Bleak or what? Then again, if Warren is Jed’s dad, that last kiss between Jed an Kate (which, by the way, came from nowhere, and was slightly unconvincing) has a very disturbing Luke and Leia vibe going on. Kate might still be the überbitch (you have to love her response to Jed’s vague excuse that he’s looking for something – “Well, if you’re looking for dust you’ve hit the jackpot!”) but you can’t help but begin to feel for her as her life collapses around her. Besides which, if she does turn on Warren, our money’s on Kate.

The character interaction between the main characters is also improving. Hell, it’s no Buffy (or even Vampire Diaries ) yet in terms of the dialogue, but the card playing scene and Jed and Ryans’s gravedigging banter is definitely the way this show needs to go. If it can make you care about the central characters more, you’ll be more willing to forgive some of its other lapses.

MILITARY IMPRECISION Interesting that Robert Bettany (circa 1815) should have served in the Fifth Northern Artillery Regiment, considering it never existed. Mark is supposed to have served in the same regiment. Maybe he was in the 5th Regiment Royal Artillery (which was formed in 1939)?

SCIENTIFIC PRECISION Just in case you’re wondering, human bone burns at around 1,400 degrees Fahrenheit, whereas gold melts at just under 2,000 degrees Fahrenheit. So no problem there – Zoe’s necklace could have been left in the furnace after her bones had been reduced to ashes.

LOOSE ENDS So is that plotline from the last couple of weeks with Kate splitting up Sean and his wife significant, or was it a completely random and overelaborate way of showing how much of a bitch Kate can be? It’s completely dropped this episode.