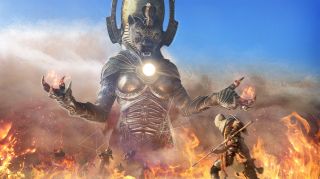 Whether you're playing Assassin's Creed Origins exclusively for the photo opportunities - let Senu land on you and press triangle/Y and thank me later - or still finding new missions and hidden treasure, Ubisoft is making sure there's plenty to add to your to do list in December.

In its 'this month in Assassin's Creed Origins' post, Ubi has revealed that not only is a new enormous deity, Sekhmet, arriving as part of the Trials of the Gods event, the previous two furious gods, Anubis and Sobek, will also be available. This is great news given the fact that not everyone was the recommended level 40 a couple of weeks after release.

But that's not what you came here for, is it? You want the Chocobo mount and, to be clear, that might not be what the below gif is but it definitely looks like the yellow feathered creatures.

All the blog post says is that there will be 'a new surprise quest' but cast your mind back to August and you might remember that Assassin's Creed and Final Fantasy 15 paired up to create the Assassin's Festival in the town of Lestallum. This looks like Origins might be returning the favour with a Chocobo-themed mount. While it's no Final Fantasy festival - I just don't think it would work in Ancient Egypt thanks to the lack of hair products - this looks like the best way to mix the two without breaking the Animus. The gif is only named as 'feather-teaser' on the blogpost so we'll have to wait for confirmation.

On top of the three gods and, err, Chocobo, other key updates include a new Nightmare difficulty level if Egypt is getting a bit easy for you, and a rather nice enemy scaling option. This means that all lower level enemies will be brought up to your level so if you don't want to feel like you're just unfairly wiping everyone out in certain regions, they'll at least now have a fighting chance at survival. You can turn it on and off though so don't worry if you still want to feel like some sort of warrior god of Siwa. There's also going to be a new horde mode added to the Cyrene arena in the shape of quest 'Here Comes a New Challenger.' This level 32 quest will deliver unlimited waves to foes for you to take out some good old Ancient Egyptian rage on.

In other good news, both the Nightmare and First Civ packs that were previously only available to buy with Helix credits can now be found in the Heka chests you'll get from the far-too-young-to-be-selling-anything Reda. This means the incredible abyssal steed who is actually on fire and makes a handy lantern when crossing the desert can be found in the random chests for 3000 Drachmas. These chests are pretty generous as far as I've seen so far. I got one of the legendary bows and the Pharoah outfit in my only two purchases this week.

And, finally, there are new additions to the store to tempt you. December 12 will offer up the Gladiator items pack with the Spaniards Armour (hello Maxiumus reference), the Palladium shield, Hercules' Gladius, Labrys and Neptune's Grasp. That's a sword, heavy blade and spear, respectively. The post also teases the 'wacky' items pack which will arrive on December 26. Ubi isn't saying much about it but it apparently will go well with the bath towel outfit you earn from a certain assassination. Expect plenty of excuses to drop into Photo Mode which, I have to say, is even better now after a few tweaks. Good luck actually doing anything.