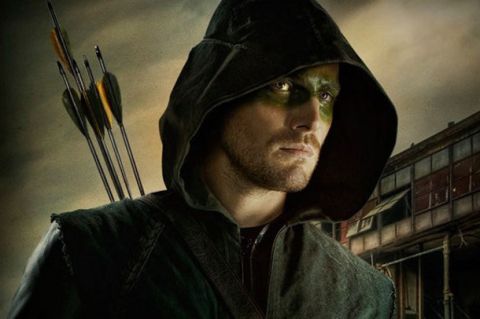 THE ONE WHERE: Oliver returns from island exile to confront a hostile takeover bid threatening Queen Industries – and an armed ‘n’ angry mob dispensing vigilante justice in the name of the Hood…

THE VERDICT: We begin with a sly piece of misdirection – just when it seems we’re opening in flashback mode on Wig Island this season premiere plays its first surprise, revealing Dig and Felicity on a mission to persuade Oliver to return to civilisation. It’s a confident, witty pre-titles sequence, full of a lovely sense of old school pulp adventure, from its gorgeous vintage prop plane and parachute drop to its jungle man-trap and perfectly executed Tarzan style rescue. Was it just me who felt the Tales Of The Gold Monkey vibe?

Back in Starling City it’s clear that the show’s committed to dealing with the aftermath of its explosive season one finale. We’re shown the ruins of the Glades – in bright daylight, no less – and there’s a definite sense of a shaken-up status quo, with the wounded city very much in the sights of various interested parties.

More crucially, Tommy’s death has given Oliver a sharp kick in the morals. Good to see him renouncing the murky ethics that made him feel like a graduate of the Punisher school of urban justice last year – a sign that the show’s creators aren’t afraid to align their lead character with traditional comic book heroism, and proof that they’ve been playing a narrative long game all along. It’s an effective moment when Oliver rejects the name of the Hood and chooses a new alias just as we crash into the show’s end titles card – the character’s finally beginning to earn that kind of mythic resonance.

Arrow ’s always excelled at action sequences and there are some corking setpieces here. The mayoral massacre is genuinely jolting while Oliver and Felicity’s window-smashing escape was so spectacular it made me want to applaud - just as I’d finished smirking at the glorious throwaway shot of the doughnuts caught in the crossfire.

HMM: There’s a passing mention of a particle accelerator being readied for a Christmas launch at STAR Labs. Could this be seeding the first appearance of DC superspeedster the Flash? If so, this seemingly innocuous line is more important than it seems – it’s the first inkling of a more science fiction friendly sensibility in the traditionally grounded Arrow universe.

HOLD ON…: Would the local news really run Oliver Queen’s return to Starling City as the top story over the assassination of the Mayor? Get some decent news priorities, people! Also: not entirely sure I buy Felicity IDing that marine with the missing hand within milliseconds of hitting the return key. That’s some serious uber-Google, lady.

WAIT!: That's meant to be Black Canary, right? Does she have no sonic powers in this version?

TRIVIA: The earthquake that devastated the Glades occurred on 15 th May 2013 – the same day that the season one finale aired. Now there’s a boggling coincidence.

DID YOU SPOT?: Quite a few nods to the comic books in this one. Isabel Rochev may feel like a straight retread of Talia al Ghul from The Dark Knight Rises but she’s an official addition to the DC mythos, first appearing in Green Arrow Vol 4 No 1 in 2010. The TV incarnation – Firefly icon Summer Glau, no less - echoes her original scheme to seize power in a recently devastated Star(ling) City. Elsewhere there’s a reference to Alderman Blood – doubtlessly intended to be Teen Titans ’ cultist supervillain Brother Blood. TV reporter Bethany Snow is another import from the comics – we first encounter her as a member of the Church of Blood, in fact. See those plot threads just waiting to entwine?

DID YOU SPOT 2: City Of Heroes was also the name of Cryptic Studios’ mid-noughties online role-playing superhero game. A tip of the cowl, perhaps? Given that Starling City is overrun by murderous vigilantes it’s a particularly ironic choice of title.

BEST LINE:
Felicity: “This morning we flew in a plane so old I’m sure I was safer once I jumped out of it.”