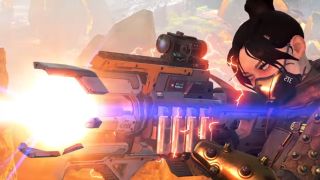 A UFO has been spotted in Apex Legends, and it's got us wondering what's on the horizon for season 4.

Reddit user Chuzeeee posted a gameplay video featuring an object floating high in the sky over the World's Edge map, which was first spotted by Eurogamer. The object has three blue lights on it in a triangle formation and seems to be barely moving (if it's moving at all). When questions were raised over whether or not it could just be a glitching care package, dataminer Shrugtal disproved that notion by posting a picture of the UFO and a care package near each other in the sky - the care package is a completely different shape and features orange lights, not blue.

It's important to note that, as we previously reported, a different unidentified object in the sky was proven to be just Gibraltar's ultimate glitching, so players are carefully analyzing this UFO sighting to prove its worth.

Several players have suggested this UFO is either a teaser for the upcoming fourth competitive season, or some kind of dramatic introduction for the leaked legend Revenant (who appeared in the trailer for Shadowfall, the Halloween event). Datamining from Shrugtal posted on Twitter has only fueled the rumor fire, as they've found references in the game's code to new zones called Harvester, Fragment West, and Fragment East.

Harvesters, which are featured in the game mode Frontier Defense in Titanfall, are massive cylinders that extract resources from a planet (they also emit a blue light...hmm). The "fragment" sections only lends more credence to the UFO rumors, as if whatever is falling from the sky may break apart and land in different areas of the map. Add that to the banners for season 4, which have a distinct neon/alien vibe, and you've got what looks a lot like a theme for the upcoming season.

The more wild rumors suggest that titans could be entering the arena, which seems unlikely as it would seriously unbalance the matches. However, Reddit user Im-a-poatoe posted voice lines they discovered that feature Crypto and Wattson spotting titans. Could it be that the behemoths will join a PvE mode? There's myriad reasons for the existence of this UFO, so stay tuned as we'll be reporting on any updates as soon as we get them.