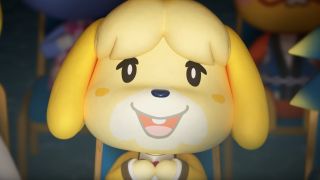 Update: The reference to in-game purchases has since been removed from the ESRB rating section on the official game page for Animal Crossing: New Horizons, and has been replaced with Comic Mischief.

Original story: It looks like Animal Crossing: New Horizons will support microtransactions in one way or another.

The official Nintendo eShop page for the upcoming game (which is also where you can go to start your Animal Crossing: New Horizons pre-load) confirms the detail in its detailed ESRB rating: "E for Everyone: Comic Mischief - Users Interact, In-Game Purchases".

The first half of the ratings are "Content Descriptors" used for potentially disagreeable in-game content, like Comic Mischief - which is about as harmless as you can get while still being potentially disagreeable. The second half of the ratings are reserved for "Interactive Elements", which explain parts of the game that the ESRB feels "may be of interest or concern" without affecting the broader rating, which is where in-game purchases are noted.

The ESRB doesn't provide any details for what those in-game purchases may be for, just that they are available in the game. Thinking about the general loop for Animal Crossing games, there are all kinds of places that microtransactions could be introduced: there could be limited-edition apparel or furniture to pick up, construction timers to shorten, or you could even pay a little every month to have one of your animal neighbors look after the place when you don't have time to go around picking fruit and making deliveries.

All of those examples all pulled straight from Animal Crossing: Pocket Camp, which is somewhat infamous for pushing players to spend money in-game. To be fair, Pocket Camp is a free-to-play mobile game, where the expectations are different from full-priced console games. We'll have to wait and see what Nintendo plans to offer Animal Crossing: New Horizons players in exchange for a little more real-world cash.

See what else is coming soon for Nintendo's home-handheld hybrid console with our guide to upcoming Switch games for 2020 and beyond.