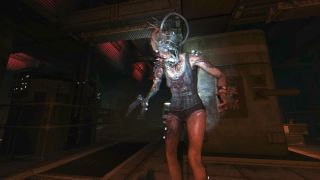 The studio behind two of the scariest games of the generation seems to be teasing their next game, if a freshly-updated website and cryptic animation are any indication.

Amnesia: The Dark Descent and Soma developer Frictional Games recently updated their official website, called Next Frictional Game (thanks RPS), for the first time in four years, but there's little to indicate what could be on its way next to scare us silly.

The last we heard about Frictional Games' elusive new project was in 2017, when the studio revealed that one of two games in the pipeline was in "full development" and would be "horrific in nature."

The updated website previously read, "Our next project has not yet been announced." That text has been replaced by a tiny, pulsing… thing. Clicking on the animation gets you nowhere, same as speculating much at this point with nothing else to go on. Other than that incredibly cryptic teaser, all we're left with are links to a few social channels and Frictional Games' full website.

As for the second unannounced project from Frictional Games - well, you guessed it - we know very little. Like the first game, the last time we heard actual words from the studio was in a 2017 blog post, which said it's "doing well" despite some technical setbacks, and that it "will be less about direct, visceral horror, and more about the player gaining an understanding of different concepts."

As always, we'll be keeping you updated as we come across every new morsel of information from Frictional Games.

We listed both Soma and Amnesia: The Dark Descent in our round-up of the best horror games of all time.