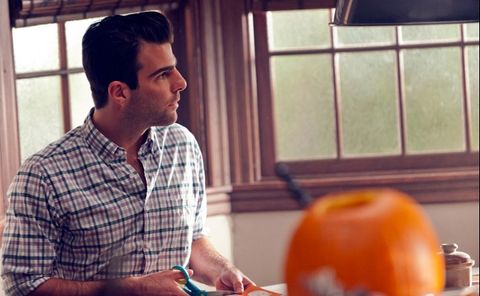 Trick or treat? Definitely a treat

Tate’s tale of the Montgomerys’ baby – kidnapped, returned to them in a series of jars, then stitched back together – is particular gruesome, but even that’s easier to process than Constance and Addy’s relationship. Some of the things Constance says to her daughter send a shiver down your spine – though they have a horrible ring of veracity too; of someone saying the unsayable. The idea of buying her a “pretty girl” mask is jawdroppingly perverse, an act of motherly generosity which jars with all our modern, politically correct notions.

When it’s not causing you to mutter, “Did they really just say that?”, the episode also delivers some effective shocks – not only the death of Addy, but also the return of Hayden, now somehow attached to the house – and nudges the plot along, with teasing hints about the nature of Moira and the Harmons’s unborn child.

STAR TURN Another thing this show is great at is vicious domestic arguments, and Zachary Quinto is magnificent as the fussy, waspish Chad. I’m kinda looking forward to seeing more of Chad and Patrick ripping each other to shreds.

IT’S WOSSISNAME! If you saw the remake of V , you’ll recognise Morris Chestnut (the security guy) from his role as our-lizard-on-the-inside Ryan Nichols.

SPECULATION Moira says “I want to, but I can’t” when her mother’s ghost asks her to pass over to the afterlife with her… but why can’t she? Is it just because she died a violent death, or is there more to it than that? What hold does the house have over all these souls? Is it somehow alive? How come these trapped spirits manifest in such a solid, tangible form (incidentally, Moira’s hospital visit confirms that they can do so far away from the house)?

Plus, why is Vivien’s baby unnaturally advanced for eight weeks, and what did the nurse see during the scan that made her faint? Does it have horns? Hmm, maybe the Rubber Man is a Visitor from V , and it has a little reptile tail…

Finally, there’s a tantalising mention of Ben’s past. He was “a troubled kid” too – does that have significance?

NITPICKS The paramedics allow Constance to fight them off and drag away Addy’s body far too easily.

STRANGELY, I’M NOT GETTING ANY RESULTS for this search...

BEST LINE Patrick: “I want a relationship with a man, not Martha Stewart!”

Read all our American Horror Story season one reviews .