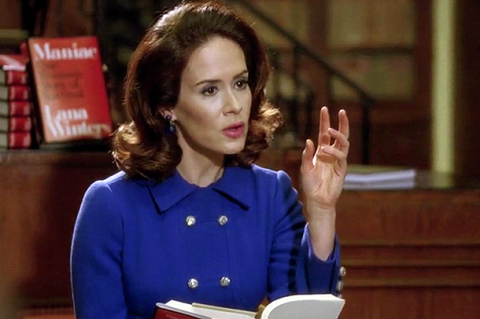 THE ONE WHERE We catch up with Kit, Grace, Alma, Jude and Lana in the years following Thredson's death. And things aren't going well...

Okay, that's not strictly true. But as the penultimate episode of Asylum closes down various storylines, it's clear once again that, on this show, no one is ever safe. At times, “Continuum” is almost preposterously glum.

The last time we saw Kit, he was looking at two women and two kids. Now we find the five of them living happily together in 1967, and making it work. Grace is still obsessed with the aliens (hey, I'm glad one of them is – the rest of them have got denial down to a T), and the local racists aren't too fond of them, but otherwise all seems hip and groovy. And then Alma buries an axe in Grace's back. Maybe she was sick of her being such an annoying hippy. It's a big shock, that seems to come from out of nowhere, just as the audience is settling into the idea that maybe this episode will be entirely about Kit's family. Instead, the action moves swiftly back to Briarcliff, where Alma finds herself incarcerated.

Yep, the asylum is still there, as are Jude, Pepper and the Monsignor. Or are they? Last week Jude had become a sort of mad prophet figure, imprisoned by the Monsignor for telling the truth. But now she's lost touch with reality completely. In truth, the Monsignor has long since left the building, having been promoted to Cardinal. Jude's delusional faith in her old crush is touching and tragic, and these scenes are delicately played by an increasingly ragged Lange. But more to the point, Pepper's dead! And we didn't even get to say goodbye. Sad face.

The biggest surprise this week was Lana's storyline. Having made the bestseller lists with Maniac – a roughly 80% true account of her encounter with Bloody Face – she's now a successful crime writer. She's also turned into a bit of an asshole, fudging the truth and spicing things up to sell more books. And here's where the episode fumbled for me.

I can believe that Lana would want to move on, to forget her past and build a new life. And we all know that fame can change a person. But Briarcliff was a life-shattering event. The scene where Lana is haunted by the ghosts of her past is great – a fun cameo for Zachary Quinto, and a nice bit of insight into her fractured mindset. But I just don't buy her almost comically shallow response to Kit. This woman was a tough crusader, and while people change, the idea that she would just give up on bringing down the asylum in favour of writing shlocky true crime volumes, didn't ring true. Though I did like the fact that her next book is about Lee Emmerson and the nun-killing spree he apparently went on after crucifying the Monsignor. That was a fun detail.

“Continuum” (and incidentally, they really should have called this episode “Alma Matters”) ends with all the major characters – with the exception of Bloody Face Jr – in a bad way. It was refreshing to have an episode with a tighter, more linear focus than usual, but now it's time to see how this thing ends.

THE ENDGAME So, it's Asylum 's grand finale next week, and there are questions to be answered...

• What happened to Kit after his meeting with Lana? Is he still alive in the present day?
• More pressingly, what's going on with his kids, and why are they so important?
• Did Jude spend the rest of her days locked up in Briarcliff?
• Where is Cardinal Timothy Howard? And has he achieved his dreams of becoming Pope?
• Will Lana stop being such a jerk?
• Can Bloody Face Jr be defeated, or will he live to fight another day and keep on breastfeeding from lactating hookers?

BEST LINE
Jude: “The cruelest thing of all, Timothy, is false hope.”