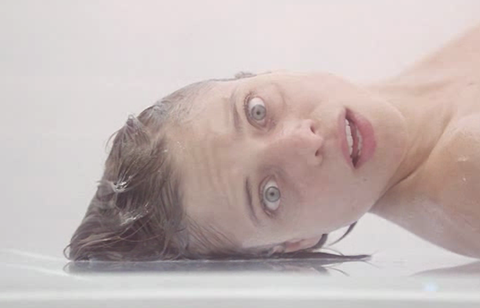 THE ONE WHERE Lana escapes and brings Thredson to justice. Kit has baby problems. Jude is betrayed by Monsignor Timothy. And Bloody Face 2 gets breastfed by a hooker.

VERDICT Asylum 's habit of casually killing off major characters continues – and it's the big one this week. Zachary Quinto's queasy, creepily mother-fixated serial killer, Oliver Thredson finally gets what's been coming to him, as Lana leaves Briarcliff, exposes his crimes and then, er, shoots him in the head and gets away with it.

American Horror Story and logic have long since parted company, but this bugged the hell out of me. She's already gone to the police and given them Thredson's taped confession. That she then stalks and murders him, but is let off by the police, was just a bit silly. There's a vague, handwavey mention that it was in self-defence, but – and I'm no lawyer – surely that doesn't apply if you go to the victim's house armed with a gun and the intent to kill?

Legal loopholes aside, it's a joy to finally see Lana free from the asylum (and rocking some serious Jackie O style too). The covert operations nun who helped her escape was oddly hilarious, and the moment when Lana's taxi pulls away from Briarcliff, giving her just enough time to flick a finger up at Thredson was solid gold. Take that, you misogynist loon!

That Lana changed her mind about having an abortion was no surprise – we already know that Bloody Face 2 is alive in the present day. I do have a slight problem with that strand of the story, I must admit. When it comes to nature vs nurture, I'm nurture all the way, and fairly uncomfortable with the notion that a child can be born evil. It's a weird attitude for such a progressive series to take, but for now at least, it seems to be the direction they're taking. Who knows, maybe they'll flip it on its head next episode.

Speaking of babies, Kit was having a seriously weird week. Just as he's getting used to the idea that Grace is back from death/space/wherever and pregnant, along comes the other dead ex. Alma is back, and also carrying his kid. That's super awkward.

The big question still is, what do the ETs actually want? Popular speculation is that Kit's kids will grow up to be alien messiahs like Ziggy Stardust or Jedward, but knowing American Horror Story , it will probably turn out to be something much nastier. I wonder what the kids are up to in the present day scenes? And will we find out in the final instalment?

We got to see a bit of the old Jude spirit back again this week. Electroshock therapy may have left her withdrawn, but it's also, apparently, given her “total clarity”. After Bad Jude, Sad Jude and Mad Jude, we've now got Jude the Righteous Avenger. I like it – let's see more of her. I hope she doesn't spend all of next week locked in that cellar. I want her to bring down Monsignor Timothy (who has swung back to being a massive jerk after beating the devil last week. Sort yourself out man, you're a bloody mess!) pronto.

Special mention should go to director Alfonso Gómez-Rejón, who invested this episode with a lovely visual flair, as he did in his previous episode, “I Am Anne Frank, Part 2”. The scenes at Thredson's house are beautifully lit (check the red and blue that washes over Lana as the cops arrive) and there’s a fabulous split screen moment that's very Brian Dr Palma. The recurring use of a fish-eye lens was distracting, rather than disorientating, but for the most part it looked great..

ICK! You've got to feel sorry for poor, doomed Pandora – the prostitute that Bloody Face 2 hires. Forced to breastfeed an obvious maniac with “mommy issues” can't be fun.

SOUND FAMILIAR? Did the music in this episode remind you of anything? It should do – it was Philip Glass's Candyman theme.

BEST LINE
Jude: “You throw me in the madhouse, you strip away everything I have, everything I know, you treat me like a rabid dog, like a madwoman. And you know what happens? I'm blessed with the gift of total clarity. I am more sane now as a madwoman than I ever was as the head of Briarcliff.”