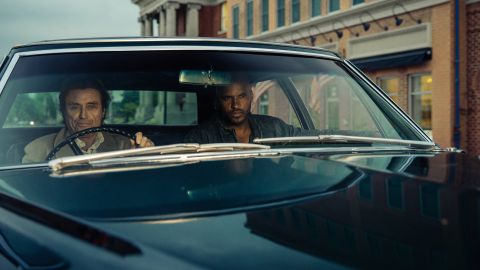 This episode shows that Gods are just as susceptible to new shiny things as we mortals are.

With a title that merges the mythos of Odin’s ravens and an obvious threat towards the gods, A Murder of Gods takes us deeper into the fledgling allegiances that are beginning to define American Gods’ developing factions. Oddly enough, rivalries are bringing people together rather than dividing them, with Mad Sweeney teaming up with Laura and the relationship between Shadow and Mr Wednesday turning into a crash-course in critical thinking.

The Coming to America tales that begin each episode are turning into subtle indicators about what you can expect from the following hour. This time we’re being shown what happens when Gods give back. A reminder that America remains a country that is still flocked to, a group of desperate people from the south of the border cross a river into American territory, with one failing to fight against the current. Hauled up from what would have been his watery demise, if the feet treading on the water’s surface wasn’t enough of a clue as to which god we’re seeing, this chap also has a crown of thorns. Jesus Christ is compassion innate, throwing himself in front of bullets to save his worshippers. It’s a gentle hint that Gods are as varied as mortals, but it’s worth noting that this episode screams in our face that we made them that way. Every prayer the characters send is either to a loving god or in fear of one that is as terrifying as they are powerful (cough Bilquis cough). Just as you rekindle a drop of hope that not all gods are arrogant brats, you’re reminded that it’s those who cross the border who are to thank for Christ’s compassion.

This theme carries on into our introduction to the entrepreneurial god Vulcan (Corbin Bernsen), who’s ditched the forge to invest in guns. As he puts it, they’re literally filled with firepower, so he claims every kill that issues from their muzzle as a sacrifice to him. Winding in a brand of nationalism that voices its passion with a hail of bullets into the sky, you can feel the show asking us how far a love of any object - whether it’s guns, media, or tech - has to go before it’s considered a religion. The answer seems to be that if people use it to define themselves, use it to explain a critical part of their attitude towards the world, then it counts as religion. Bernsen’s Vulcan is canny without being cocky, and the look he gives his gun veers expertly between pride and an intense attraction. He’s reinvented himself, and now he’s reaping the benefits. I’m honestly beginning to think Mr Wednesday might have gotten it wrong, as Vulcan proves that the new gods might be right to reinterpret willing old gods, not annihilating them. Could it be that Mr Wednesday is just as bloodthirsty, just as territorial as he claims the new gods are? Good and bad are beginning to become a case of perspective. I love it. It’s so easy to claim something’s either black and white, and now that American Gods is getting into the grey area, it’s becoming all the richer for it.

Just like Shadow, you’re questioning everything that comes out of Mr Wednesday’s mouth now that you’ve seen the new gods for yourself. They don’t speak of war - they speak of friendship. Yet for all the peace they try to make, Shadow still can’t get over the fact that Media floated in. Seeing the physicality of the new gods is one step too far for him, as it suddenly makes all this divinity very real to him. The quickfire questions he yells at Wednesday aren’t answered, though. Not really. Like a tutor, Wednesday is answering Shadow’s admittedly valid concerns by getting him to interrogate why he’s asking. Shadow needs to think for himself, it seems, instead of relying on Mr Wednesday’s explanations. Their relationship is flourishing, with Wednesday becoming a teacher who believes in hands-on experience. Although Shadow is arguing more than he’s thinking to begin with, when Wednesday takes centre stage to talk to Vulcan you can hear Shadow’s mind whirring. Like all of us, every now and again he just needs to vent a little.

Venting a lot is more Mad Sweeney (Pablo Schreiber) and Laura’s (Emily Browning) style. Despite the arguing, swearing, and white-hot loathing between the two, Schreiber and Browning bounce off each other with the kind of energy usually reserved for when gunpowder meets a spark. An odd kind of allegiance is being built between the two, with Mad Sweeney keeping his eye on the golden coin in Laura’s stomach. For her part, Laura is making the most of having a leprechaun by her side to get him to steal cars for them, and I suspect he’ll be doing a bit more to help out in the future. Thankfully their hate/hate relationship has the edge taken off a bit by the decidedly pure Salim, the djinn’s lover from episode 3. He’s on the hunt for the djinn. Having someone who is compassionate, kind, and understanding team up with Laura and Mad Sweeney is a phenomenal way to show how gods can inspire for different reasons. Mad Sweeney and his coins hint that sometimes it’s for wealth, whereas Bilquis’ lovers show it can be for lust, but in Salim’s case it’s love.

A stunning ending means that things have definitely taken a turn for Mr Wednesday and Shadow, but at the moment I can’t decide whether that’s for better or worse. They had better be watching their back, because Laura’s not around anymore to protect Shadow.

This episode shows that Gods are just as susceptible to new shiny things as we mortals are.