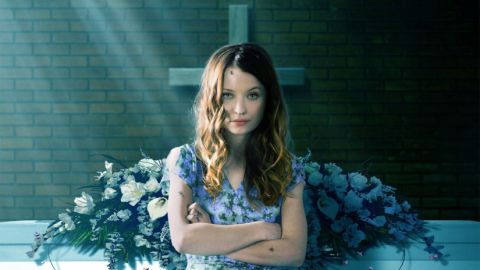 Dedicated to the little-seen Laura Moon, it’s a great insight into how complicated a character she really is.

This episode is all about Laura, and it’s about damn time. From the surface of the episodes so far we’ve gleaned that she’s the almost-dutiful wife. Making up what she lacks in faithfulness with her beauty and that soft ‘puppy’ tone she uses towards Shadow. Now her life is put on display, or - more accurately - the lies that kept her going. Git Gone gives us insight into how she sees the world before and after her death. Unnervingly, death barely changed her. Except for the super-strength. That’s definitely new.

Emily Browning’s performance as Laura Moon is founded on that sweet Laura we’ve seen in flashbacks, who manages to fool us by leaving everything unsaid. All she did before is purr ‘hello puppy’ and Shadow is putty in her hands, so it’s refreshing to see that there’s more to her than we realised. In life she’s logical, with a cold inclination to look at the bigger picture and therefore practically negate responsibility when faced with her various misdeeds. Once she’s risen from the grave her love - if you can call it that - for Shadow pushes her onward. He’s literally the light of her life, as emanating from his body is a pulsing orange aura. Knowing Laura as we do now, she’ll probably ignore that mystic sign and find a way to rationalise her need for Shadow away.

When you put this impermeable figure up against pre-prison Shadow you can see precisely why they got together. They’re almost opposites, with Laura’s stoic demeanour allowing Shadow to see her as anything he wants. Kinky, loyal, sweet - all of these words could be applied to that inscrutable look Emily Browning does so well. However, that’s not because Shadow is trying to make her something she’s not, but because Laura is just damn impossible to read. Cockiness surges through pre-prison Shadow’s veins yet Laura is distanced, testing herself against the extremes by trying to commit suicide in a hot tub with bug spray (named Git Gone - see what they did there?). Or maybe she wasn’t trying to end it all - maybe she was searching for a thrill, as the one thing you get from her time working at the casino is its monotonous routine. It’s ironic for somewhere so based on luck and excitement. She likes to shuffle the cards, but that’s about all we manage to understand from her time there.

Her greatest strength is also her weakness: as she’s not attached to anything, she can’t find the passion to invest her time in anything. From her affair with Robbie to the ease with which she destroyed Tech Boy’s henchmen when she saved Shadow (oh yeah, that was her by the way), she tackles these extremes as if to prove she’s capable of doing more. Yet she still comes out the other side the same, calm person as before. Unfulfilled is probably a more accurate way to describe her. Perhaps even… hungry. In the way binge-eating is a blasé form of hunger, that is.

Her impenetrable disposition isn’t all Emily Browning has to offer, though. With one roll of the eyes at Anubis and Mr Isis as they try to stitch her back together you can feel the contempt. Her outburst at Anubis when she refuses to accept her version of the afterlife is a mighty reassertion of the fact that humans can tell Gods to go to hell, that they don’t have to be docile and meek. When someone tries to tell her what to do Laura fights back. Angrily. Not physically, though - until she meets the people trying to kill Shadow. Letting the ballet of her unstoppable super strength take over, she rips them limb from limb. In one memorable move she kicks a guy in the balls, and her foot reaches his chin. Playing in the background is romantic, dreamlike music that shows you she’s doing this all for love - a love she seemed to forget when she was alive. The next episode will show precisely how on earth Shadow reacts to seeing his dead wife again. Let’s hope the sweet ‘hello puppy’ moments are kept to a minimum, because this episode proves that Laura shouldn’t be underestimated. She might even find the passion to pursue… something. God help anyone who gets in her way when she does.

Dedicated to the little-seen Laura Moon, it’s a great insight into how complicated a character she really is.