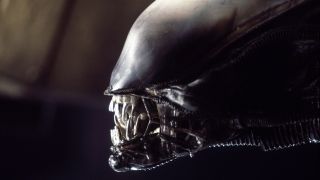 Back when the Prometheus sequel was, well, a Prometheus sequel, Ridley Scott said it wouldn't feature any xenomorphs in an attempt to separate the franchise from the Alien series. Then he changed his mind. Switching the title to Alien: Covenant, he later confirmed that every type of creature from the beast's lifecycle would appear. Facehuggers, chestbursters, you name it - they're back! While we've yet to see any full-size xenos, the official Alien Twitter has now given us a glimpse at one part of the new creature design:

Each film in the franchise so far has tweaked H.R. Giger's original creature design, and that's happening again for Covenant. As dictated by its lifecycle, the beast adopts certain elements from its host which affect how it appears. By the size and humanoid structure of that one hand, we know at least one member of the crew will host an alien embryo.

While we still don't know much about the cast of characters, Danny McBride has now confirmed his role in the movie. "I’m the pilot of the spaceship Covenant," he tells Rolling Stone, "which is a colonization ship, searching for a planet where we might start life anew. I run the ship."

Later asked about green screen vs. practical effects, McBride's response confirms that Covenant will be a return to the franchise's early days. "I didn't know if it would be all green screen, but most of the stuff is practical effects: when you're running from an alien it's really a dude in an alien suit coming after you! The sets are incredible and you're in them: We go through some inclement weather at one point on the spaceship and this whole gigantic set is on a gimbal, shaking up and down. You don't have to use your imagination."

That behind-the-scenes look at the xenomorph's hand also confirms the use of physical alien costumes. Scott's original movie featured a guy in a suit as the alien, and likewise, James Cameron's Aliens utilised a team of actors to do the same. It wasn't until Alien 3 and Alien Resurrection that CGI xenomorphs were used for the bulk of filming. Could Covenant be attempting to recapture the glory of the first two films? Sure seems like it.

Directed by Ridley Scott and starring Katherine Waterston, Michael Fassbender, Demian Bichir, Carmen Ejogo, Jussie Smollett, Amy Seimetz, Callie Hernandez and Danny McBride, Alien: Covenant will open in the US on August 4, 2017 with a UK date still to be determined.