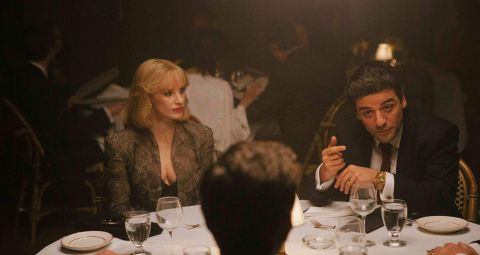 J.C. Chandor’s previous two – excellent – films concerned themselves with ordinary men floundering in extraordinary circumstances, often the dramatic sweet spot between calamity and success. Margin Call (2011) follows a firm of bankers facing ruin in the 2008 crash; in All Is Lost (2013), a sailor faces his own mortality in the vast, uncaring ocean.

By contrast, AMVY is about an extraordinary man – principled business owner Abel Morales (Oscar Isaac) – in the relatively mundane world of 1980s NYC heating-oil sales. Don’t be fooled by that provocative title either: this is a ‘violent year’ in the same way There Will Be Blood was wall to wall with the red stuff.

It’s the eve of a make-or-break real estate deal for Morales, who’s looking to purchase a popular plot on the Hudson river to store and ship his oil. “I like to own the things I use,” he explains to the seller, never one to shy away from an aphorism.

But you can’t help thinking the things Morales uses are going to end up owning him. Someone’s hijacking his oil trucks; his Mob-connected missus, Anna (Jessica Chastain), keeps threatening to get the Goodfellas in; and District Attorney Lawrence (David Oyelowo) is threatening a full-scale investigation. Can Morales break even without breaking the law? And, more to the point, can Anna?

Isaac has something of the young Pacino about him, a danger beneath the civilised veneer, and Chandor aims to copy that distinctive 1970s slow-burn style – as if The Godfather’s Michael and Kaye Corleone had really gone legit – sometimes at the expense of conventional jeopardy. Rare is the film where the sales pitches are more exciting than the stick-ups, but that’s largely the case here: the scene where Morales instructs his charges how to snare a customer is a masterclass in lean, character-driven screenwriting.

With a score so unobtrusive it might well be speaker hum, and hushed business meetings in barber shops and restaurant backrooms deciding the characters’ fates, AMVY places itself in stark contrast to ’80s films like Scarface and Wall Street, with their acquisitive anti-heroes.

It’s almost an anti-gangster film, and Chandor navigates potentially incendiary elements of the plot (break-ins, car chases, double-crossings) as calmly as his hero does. “You will never do anything as hard as staring someone in the eye and telling them the truth,” Morales tells his trainees, a lesson Chandor has made his mantra.