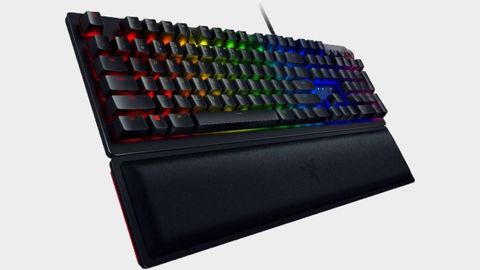 A keyboard whose excellent switches match its thoughtful design to deliver performance, comfort, and aesthetics in one sleek package

Razer has continued to establish itself as a major player in the PC and peripherals space, turning out high quality, attractive products ranging from gaming laptops to RGB lit mousepads. They've even developed their own proprietary switches for mechanical keyboards that, while similar to offerings from Cherry, each have distinct characteristics that make them more of a viable alternative than an imitation. That trend continues in a bold way in the Huntsman line (both the Elite iteration reviewed here as well as the standard model that lacks the dedicated media controls and wrist rest), which packs Razer's fascinating opto-mechanical switches.

For a look at some of the Huntsman's competition (and to see where it falls on our list), check out our best gaming keyboard roundup. And to get a handle on some of the more technical jargon people use when describing decks, have a look at the keyboards section of our hardware glossary.

Before we delve into the intricacies of the switches, though, let's begin with the design, the first and most obvious characteristics you'll notice of the Huntsman Elite. The solid plastic chassis is topped with a sturdy aluminum top plate in matte black, which gives the unit a substantial, industrial feel and serves as a unobtrusive, faintly reflective backdrop for the attractive suite of RGB lighting. The raised keycaps allow the glow of the colored lighting to stand out against the  top plate and complement the colored glow of the keycap labels. The keycaps themselves are pleasantly concave and feel pleasantly tactile under your fingertips, particularly paired with the opto-mechanical switches (more on that later).

The dedicated media keys tucked away in the upper right hand corner of the deck are a very welcome addition and individually lit in the same way as the primary keys. The volume wheel juts slightly over the right edge of the board which is not only a thoughtful design choice (it's incredibly easy to turn without looking down) but actually adds a bit of pleasant asymmetry to the silhouette. Even the leatherette wrist rest is bounded by bars of colored lighting and has a tastefully subtle black-on-black version of the three-headed Razer snake logo.

The features category is the only place where the Huntsman Elite falls a bit short of its competition, lacking USB or audio passthrough and dedicated macro keys. The extras it does include, however, are well crafted and very welcome. The media controls are responsive and easy to click, and the volume wheel can be configured to adjust a number of other settings, from lighting packages to brightness, to in-game functions like inventory scrolling. The wheel is itself a button, as well, which defaults to muting audio output by default. It's a simple but welcome addition to the media bar that other keyboard manufacturers would do well to mimic.

The other major feature in the Huntsman Elite package is the leatherette wrist wrest, which attaches to the base of the deck magnetically.  It's built from memory foam that conforms to the shape of your wrists and cradles them in comfort, and its inclusion ensures that even lengthy sessions of gaming or typing won't leave your wrists feeling cramped or sore.

I've saved the best for last. The opto-mechanical switches that are the star of the Huntsman line are some of the best switches I've ever had the pleasure of using. They're similar in terms of tactile feedback and click volume to Cherry MX Blues, but at an actuation force 15g lighter (45g vs. the Blue's 60g) they're easier to press and less likely to leave you fatigued even after a marathon of typing. More importantly, the actuation tech tucked into them, which foregoes metal contact leaves (and the associated debounce) and relies on a bar of light inside of the switch that actuates the key when it passes through a chamber and alights on a sensor. This setup virtually eliminates hysteresis, the phenomenon that occurs when the actuation point inside a switch is at a different height than the reset point - in practice this means that it's extremely easy to spam and responsive when being repeatedly clicked, which is especially nice for gaming applications.  Also, because actuation doesn't rely on physical contact, the switches are considerably more durable - Razer rates them at 100 million keystrokes, double the industry standard.

Each key is also individually fitted with stabilizers to reduce key wobble. The result is that the keys on the Huntsman Elite are some of the most stable I've ever typed on, a subtle difference but an important one for a keyboard you intend to use as your primary driver for any length of time.

Razer's software suite, Synapse, has improved dramatically since its inception and is no longer a piece of clumsy bloatware but actually feels like a practically designed, useful application. It's a breeze to setup macros or program the lighting across the board, whether you want to tinker with individual keys or highlight and program broad swaths of the board all at once. The Huntsman Elite also allows you to stash profile data onboard the deck so if you move it between machines you don't need to reconfigure it every time.

Retailing at $199.99, the Huntsman Elite isn't an inexpensive proposition, but it's worth every dollar and is one of the best mechanical keyboards I've ever had the pleasure of using. It's become my primary deck at the office and I doubt it'll be replaced anytime soon, matching comfort, ease of use, and superb performance to provide a premium experience whether you're typing or burning through matches in Apex Legends. If you've got the room in your budget, and aren't specifically fussed about USB/audio passthrough or dedicated macro keys, the Huntsman Elite is one of the very best mechanical keyboards you can find anywhere.

A keyboard whose excellent switches match its thoughtful design to deliver performance, comfort, and aesthetics in one sleek package