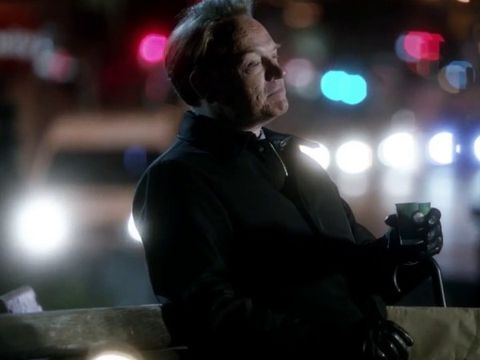 THE ONE WHERE People die suddenly with injuries belonging to their doppelgängers in the other universe. It seems David Robert Jones (aided by a blackmailed Broyles) has a plan that could destroy both sides, so Walter crosses over to help the other Fringe team investigate.

UNIVERSE Over there and over here, switching a lot – orange credits.

VERDICT It seems Fringe is settling into another strong run of episodes. Last week's stonker rolls into this story in which Walter (one of the "consultants" of the title, another presumably being Jones's unnamed accomplice), travels to the other universe to work on a case. That’s a big step for a man who, at the start of this season, never left the laboratory. The fact that he is later able to bond with Fauxlivia is also a sign of his maturing attitude to their counterparts beyond the Bridge.

It's a fascinating concept that injuries found on bodies in one universe could have been inflicted on the other side and it's a mystery plot that could only work in Fringe . It gives us the best opportunity so far to explore the working relationship between the two sides. Once again it's the characters who excel. This story belongs to Broyles, who - in the face of our wild speculation - turns out not to be a shapeshifter (or so it seems; his comment that loves is what "makes us human" could be pointed) but instead a man capitulating with Jones in order to save his son. He's making compromises in a way that echoes Walter's own quest to heal Peter. The desire to protect a dying child has been at the heart of everything that's happened in this show.

Having seen what such compromises can do, Broyles ultimately prefers to turn himself in. Which is the episode's only weakness: the ending is anticlimactic. Lee and Fauxlivia's suspicions, investigation and chase are wrongfooted when Broyles simply chooses the honourable path. It feels right for his character but the tension that was building, the threat of the mole within Fringe Division and the potential disaster of a sabotaged bridge machine, fizzles out immediately. Let's not be ungrateful, though; it was another well written, well acted episode with an entertaining mix of darkness and light.

DIFFERENCES We discover loads of ways in which the alt-universe differs from ours. Best difference ever ? They keep domesticated badgers as pets! Also, no black box flight recorders, memory foam pillows or (bizarrely) Sherlock Holmes.

NITPICK Maybe Fringe is confusing itself... A security guard on Liberty Island tells Olivia he was sorry to hear about Agent Lee. Doesn't he mean Captain Lee? Agent Lee is right there. Unless this is a symptom of something awry...?

ACTING UP Why has it taken me so long to realise that David Robert Jones actor Jared Harris (also seen as Moriarty in the recent Sherlock Holmes sequel ) is the son of Richard Harris? They're very alike! Jared Harris was also married to Emilia Fox for five years, by the way.

LMAO Any episode with Walter as a key component will be crammed with amusing asides. Having to go to the toilet before a long trip (even if it's just through a door to the other universe) is funny, but his best throwaway comment comes when Fauxlivia arrives: "Ah my escort is here! [Whispers] By escort I don't mean prostitute."

SWEET Walter wins us over once again with his grinning face and his gleeful cry of "There's my son! And his girlfriend !" The only thing that comes close to being this cute is Astrid bringing a present for her doppelgänger; Astrid seems genuinely pleased to see her, and alt-Astrid is thrilled with the gift of instant coffee.

OBSERVING THE OBSERVER At 29:06, there's the swiftest glimpse of an Observer walking past Jones and Broyles as they meet in the darkened square.

ECONOMICS IN-JOKE? The dead businessman at Aartz Holdings "was pulled out of his chair by an invisible hand or something." The invisible hand is a term coined by 18th century philosopher Adam Smith, the father of modern economics. It's his term for the self-regulation of a market economy. It can't be a coincidence that the Fringe writers use that term to describe what inexplicably befalls a banker.

MORE QUESTIONS THAN ANSWERS David Robert Jones plans to collapse both universes... so where would he live? That's suicidal! Unless he knows of a way to travel into a third universe . And why does he need those hyper-evolved human hybrids if he plans to destroy everything? Unless he knows that crashing the two universes together will result in a place where only his race of genetically engineered creatures can survive.

BEST LINE
Walter: "In the case of a mole, nobody should be above suspicion. Frankly, I'm still upset about Nixon."