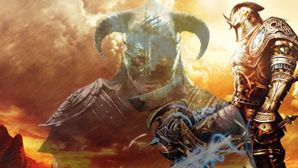 The Elder Scrolls is the king of the genre - everyone knows that. We gloated about it in our review, posted countless videos of the wonders and oddities we discovered, and even named it as a runner-up for our game of the year. Needless to say, we never expected that 38 Studios’ Kingdoms of Amalur would come anywhere close to providing the massive, overwhelming world that Bethesda put together in Skyrim.

But despite being a smaller game from a smaller studio with smaller goals, there are certain areas in Amalur that shined especially bright, and even some spots where the newcomer bests the grizzled veteran.

Skyrim: Each level earns you two things in Skyrim: a stat to buff, and a single skill point to use. This point is extremely valuable. There’s no differentiation between combat, social, or crafting trees, so it’s remarkably easy to screw yourself over. Put too many points into crafting at an early level and you’ll barely know how to use the weapons you make. Split your points between a few social and stealth skills and you’ll be lucky to survive a single encounter with a dragon or giant. Spreading yourself too thinly can lead to having a much less powerful character, and since there’s no way to reset skills, you might need to restart if you mess up. Oops.

Above: The skills and abilities of Amalur are explained in this trailer

Amalur: Amalur has a clear definition between “skills” and “abilities.” At each level, you’ll gain one point to put into a skill, which includes things like crafting, persuasion, and stealth, as well as three points to put into combat abilities. You’re still not able to become a master of everything, but the system promotes trying out different elements of the game without fear of getting trapped. If you do decide that you made a mistake, or don’t like the skills you picked, you can return to a blank slate for a few thousand coins, which lets you experiment even more.

Skyrim: You’re sort of creating your own class in Skyrim, which allows for a good deal of customization – but since skill points are so limited you’re never really able to take full advantage of the different trees in a single playthrough. You might be able to put some points in stealth and some in light armor or archery, but there are only some minor synergies between them. There's no room for experimentation. Also, since there’s no way to get refunded points, multiclassing can end very badly.

Above: Choose wisely, because you can't go back on this one

Amalur: Though the combat skills are much more limited than they are in Skyrim, Amalur’s multiclassing rewarding players for dabbling in the different skill trees. Putting a few points into the Warrior skill tree and some in the Finesse tree will unlock special multiclass perks, and the more points you spend the more powerful these synergies become. Mage/Warrior will turn you into a magical warrior with enchanted blades and the ability to teleport around the battlefield. It works in every direction and rewards you for mixing the classes as you please.