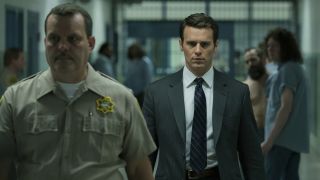 Have you noticed how everyone loves a good murder? Not in a creepy, they want to be a murderer kind of way, but in a people are morbidly fascinated way. If the huge popularity of podcasts such as Serial and My Favourite Murder and shows like Making a Murderer and Hannibal have taught us anything, it’s that we’ve always been interested in this dark aspect of our society. Little surprise then that Netflix has a new Original for you which tells the story of the birth of criminal psychology.

If you feel like you’ve just accidentally wandered into a university lecture let me put your mind at ease. Criminal psychology is something familiar to most of us whether we realise it or not. It’s the study of the motivations and reactions of criminals and it's the reason terms like ‘serial killer’ and ‘criminal profiling’ are so well-known today. It’s hard to imagine there was a time when criminal psychology didn’t exist, but it wasn’t that long ago that the majority of law enforcement saw no value in understanding why a murder might kill if it wasn’t the obvious vengeance/jealousy/robbery. That’s the story of Mindhunter.

Based on the book Mind Hunter: Inside the FBI's Elite Serial Crime Unit by Mark Olshaker and John E. Douglas, this new Netflix Original is set in the 1970s and tells the story of how criminal psychology was born in the FBI. It’s part fact, part fiction with the lead characters Holden Ford and Bill Tench loosely based on Douglas and another FBI agent called Robert K. Ressler, but with all the cases taken from real life.

I sat down with the stars of the show, Jonathan Groff and Holt McCallany, who play FBI agents Holden Ford and Bill Tench respectively, to talk about the upcoming series and the message was clear; Mindhunter might tap into your obsession with murder, but it’s not your usual show about serial killers.

It's all about what we DON'T understand

“I think that people are endlessly fascinated by serial killers because they can’t fathom how these men are capable of committing such brutal crimes,” Holt McCallany tells me right from the get-go. “It’s the fascination with the unknown; they’re so different than we are, that we can’t believe they can do the things that they do.”

And he’s not wrong. When we understand something we quickly move on, but when we can’t wrap our heads around what’s happening, we play it over and over again in our minds. This is exactly what happens to Holden Ford when he starts to learn about criminal psychology in the first few episodes of Mindhunter. He doesn’t understand why these serial killers are doing what they’re doing, which just drives him to understand more.

Forget the movies... this is real life

We’re all used to seeing murder on the big (or little) screen and thanks to things like The Texas Chain Saw Massacre, Dexter, and Heavy Rain, stories about serial killers aren’t even that uncommon. But more often than not, the murderers are portrayed as 2D versions of evil and that’s not what Mindhunter is about. “We wanted to eliminate that idea of the comic book villain version of serial killers,” Jonathan Groff tells me. “[Producer David Fincher] wanted to take a really realistic look at who these guys are”.

McCallany agrees: “When I think of one of the great things of this particular show, it’s the authenticity with which David Fincher has decided to treat serial killers. So there’s none of this highly-stylised Hollywood versions of these men. He shows them as they really are; these fractured, tormented sad characters that they are, and so that’s a very different approach then you see in other shows of the genre.”

And if you’re thinking, ‘Well, duh’ don’t pretend like you’re not at least slightly attracted to Mads Mikkelsen’s Hannibal. You’re unlikely to find a replacement crush in the serial killers featured in Mindhunter though as the show is keen not to “romanticise the serial killer”. While the personal lives of the FBI agents are completely fictionalised, the showrunners felt it was important to keep the truth about the crimes which led to the development of the FBI’s Behavioral Science Unit intact.

“We’ve kept every detail about the serial killers and what they’ve done to be absolutely true.” Groff explains. “So it’s all real life information - obviously it’s played by actors and a dramatisation - but the writers try to stay as absolutely true as possible when it came to describing the specific crimes themselves, which I think makes the show really unique and special in that way, that you’re getting the real information.”

If, like me, you were hoping for some action mixed in with the true story of how criminal psychology came into being, you’re going to be disappointed. The majority of Mindhunter takes place from behind a desk (although it’s no less entertaining because of it) and the ‘action’ of the show is all to do with the conversations the characters are having.

“Part of the intrigue, I think, of Mindhunter is that it’s people in rooms talking,” says Groff. “So we do, as FBI agents, go out into the field… but the action in our show is the conversation, which I think is what makes the show so special. It’s the interview scenes and the conversations between the characters [which] take so many twists and turns psychologically that… are our action scenes.” You mean one of the agents isn’t going to be kidnapped by a serial killer and have to be daringly rescued by the other?

Forget the idea of buddy cops who treat each other like brothers and swear to look after each others wives should something happen to one of them… Ford and Tench don’t have that much in common. “We’re sort of polar opposites as human beings in a lot of ways, which ended up becoming a really fun dynamic to play on the show,” says Groff. “And it was so fun to play that kind of brotherhood that they form with each other, even though they’re so different.”

But while they do eventually form an unlikely bond, it’s not all smooth sailing. “As the season goes along,” Groff explains. “The shit kind of hits the fan in really interesting ways in the relationship, and it gets more and more complicated.”