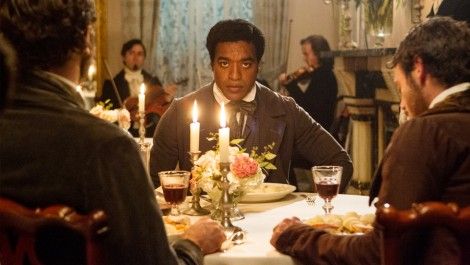 Steve McQueen’s direction can feel like having your hand held up to a flame. Your reflex is to recoil, but McQueen’s unflinching camera holds you in place, forcing you to experience the physical disintegration of Hunger ’s Bobby Sands or the self-flagellating excesses of Shame ’s sex addict, Brandon.

12 Years A Slave , the brutal and terrifying true story of a free man sold into slavery in 1840s Louisiana, is no exception – yet it’s not the film you expect from McQueen, either. Where Sands and Brandon were both at the centre of their own character study, Chiwetel Ejiofor’s Solomon is closer to an observer – dwarfed by the people he meets and the sweeping canvas he inhabits.

Rich and textured supporting characters – most notably Michael Fassbender as the sadistic, scripture-quoting slave master Edward Epps and Lupita Nyong’o as his abused ‘favourite’, Patsey – come at the cost of much insight into Solomon’s own psychological state.

But if the lack of introspection feels alien for McQueen, the raw and physically specific treatment of suffering is entirely his. Though Solomon is initially sold to a decent preacher (Benedict Cumberbatch) who treats him kindly and makes use of his talents as an engineer and musician, he soon gets on the wrong side of a maniacally insecure overseer (Paul Dano).

His punishment is to hang by the neck from a tree, on the brink of suffocation for several minutes. Behind him, children play and other slaves go about their business: the banality of evil, the learned helplessness of a race, and the unthinkable suffering of an individual all spoken in one agonising, seemingly endless wide shot.

The film’s sound design is a masterpiece in itself. The crack of a whip is amplified to gut-wrenching volume, while the natural soundscape of the plantation – the cicada chorus and the slaves’ songs – provide a score that’s far more resonant than Hans Zimmer’s oddly conventional effort.

Ejiofor’s soulful performance is rightly being discussed as a Best Actor frontrunner, but Solomon is, at times, sidelined by his stoicism.

You can feel the magnetic pull of McQueen to regular collaborator Fassbender every time he’s on screen. And though Epps is a familiar villain – a blend of Django Unchained ’s Calvin Candie with Schindler’s List ’s Amon Goeth – Fassbender gives him vigour and inner life, while it’s Nyong’o’s wrenching work as Patsey that gives 12 Years its heart.

Visceral, vital and anchored by its earnest performances, this is a potent portrait of a shameful historical truth.