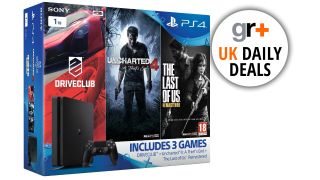 Black Friday 2016 is nearly here which means there's plenty of money saving teasing ahead of the big day. We've saved you the time looking though, and rounded up today's best deals in the UK from around the web.

Today's deal of the day is a great PS4 Slim bundle, including a 1TB console, Uncharted 4, The Last of Us and DriveClub all for just £249.99 at Amazon UK.

While on the TV front there's a great £250 saving on a Phillips 49 inch Ambilight 4K telly for just £404 at argos.co.uk. Not only will it give you a great picture at an amazing price but the Ambilight system will cast light on the walls to match the screen and further enhance the image.

But if you're just after games then there's a nice Call of Duty: Infinite Warfare PS4 deal at Tesco Direct, or Gears Of War 4 going cheap at The Game Collection.

Take a look at the best UK game deals below – and come back tomorrow for more PS4, Xbox One and hardware bargains. For more, check out our daily best gaming deals hub.

Two hundred and fifty quid isn't bad for a 1TB PS4 Slim at the best of times but throw in 3 great games and you've got yourself an exceptionally good deal. That's currently a cheaper price than Amazon has listed for a PS4 alone. And, if you want, you can swap out The Last of Us for Ratchet & Clank.

There's a £250 saving on this 4K, 49 inch TV, although perhaps its most interesting feature is the addition of Philips' Ambilight system. This additional lighting illuminates the wall behind the screen with complementary colours to enhance whatever you're watching. It's also an Android smart TV so you can access things like Google Play Netflix, iplayer, Youtube and more.