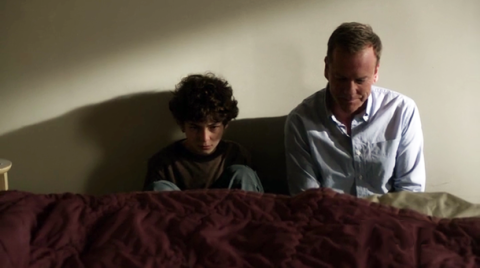 THE ONE WHERE Newly arrived in California, Martin and Jake meet Amelia's mother, Lucy, and embark upon a search for her missing child. Bad things are afoot elsewhere, however – as an assassin is on the prowl...

VERDICT You can't help but wonder what's been going on in the writers’ room during Touch 's hiatus. The team stamped a clear template in season one: Jake provides numbers, Martin hunts them down, people all over the world connect to these numbers, and everything ties up at the end in a big, shiny bow. But as the first year went on, it was obvious that the show needed something more to make it work – tuning in every week to watch Martin run around like a crazy man while a bunch of strangers act out morality plays got real old, real fast.

So have the showrunners made any adaptations for this season two opener? Well, we don't know if it's going to last, but the structure of this episode is much more formulaic: there aren't any grand connections going on in the wider world, and it's basically an A-to-B-to-C story as Lucy tries to find her child and, in Europe, we're introduced to a serial killer. The strange thing is that it works. Whether this is a temporary narrowing of Touch 's horizons or a whole new approach, “Event Horizon” isn't a bad episode at all. We need a break from the relentless plinky-plonky music and faux wonder from time to time, and this is certainly a better break than the last episode that aired .

A lot of this improvement is to do with Maria Bello as Lucy. She's one of the best actors in the business today and, in the absence of the strangely insipid Clea from season one (who isn't missed here at all), she provides some real welly. When the inevitable Touch cliché happens and Martin asks her to babysit Jake while he runs off to investigate something, she's actually quite annoyed about it – more like a real human being than Clea ever was.

As for the serial killer, he's murdering all the special people around the world who can see the Amelia Sequence (also called the God Sequence in this episode). He's doing it on behalf of God, apparently, using a ritualistic knife engraved with the Tree Of Life. And boy, is he straight out of The Da Vinci Code ...

CRINGE OF THE WEEK Calvin talking about his business and telling his partner, “We were going to change the world!” This is also accompanied by an, “it was never about the money” speech. Seriously, writers need to stop having the heads of companies in their plots coming out with this cheesy nonsense – we've heard this speech a million times.

BOO, HISS There's another new villain introduced in this episode: Lukas Haas as Calvin Norburg, a geeky physicist who works for Aster Corp and is having a major crisis of conscience about the fact his work is going to be used to create some kind of sentient computer, rather than helping the human race. He's suitably sympathetic all the way through the plot – even helping Martin at one point by comically knocking out a security guard with his car door – but the ending reveals that he's the guy who's got Amelia squared away. We're disappointed in you, Calvin.

COUNTING THE HOURS In episode two of Touch Jake said that he'd been alive for “11 years, four months, 25 days and 13 hours”. In this episode he changes that to “11 years, eight months and 16 days”, meaning that since the show began, only around four months have passed. As his birthday is 26 October 2000, this also means that Touch is set last year rather than in 2013. And now my brain hurts.

NUMBERS GAME Jake plays a bunch of arcade games and stops when they each reach a high score of 5227.

CRYSTAL GPS By shining a light through a crystal onto a large map, Jake tells Martin where to go to find Amelia. This kid's got class!

OOH, NICE The opening credits have been rejigged with a slightly different tune and lots and lots of pretty images. Definitely a shoe-in for the most attractive TV show credits of the year... Back off, Game Of Thrones and your silly map!

DID YOU KNOW? Maria Bello also played a mother desperately searching for her daughter in the film The Dark .

THE PRODUCERS Now, I'm not saying this is unprecedented and it could actually be happening all over the place, but something struck me while watching Touch 's opening credits. The names of the show's producers go on forever . In the end I had to rewind and count them all!

Touch has, in order of appearance:

Which means that, in total, this show has 16 producers. Does that sound like a lot to you? And so many different job titles! I'm envisioning them all back-stabbing each other behind the scenes to see whose name comes highest, and arguing about whether “co-executive producer” is more important than “consulting producer”. Then they'd hit each other in the face with fish, like in that Monty Python sketch. Okay, maybe not that, but I do feel they need more humour in their lives.

PRIORITIES! When Lucy and Martin rush into a motel room to find Amelia, Lucy leaves Martin fighting with a man with a gun while she runs into the next room after her daughter. When it's clear that she isn't there, does Lucy go and help Martin overpower his foe? No, she rummages through a backpack she finds. You suck at back-up, Lucy.

GOOD RESEARCH AWARD This week the award goes to whomever it was who decided that when the assassin writes the number “seven” on a piece of paper, he puts a line through it – which is how it's usually written in Europe. That's the kind of little thing that can make a scene really feel as though it's shot overseas, rather than in a Hollywood backlot.

HACKED OFF The nerdy journalist who helps Martin break into a lawyer's office and steal every file from his computer doesn't even blink at the thought of breaking the law. Is this some kind of comment on the British hacking scandal?

BEST LINE
Lucy: “This is a little weird – nine hours and we're already living together.”