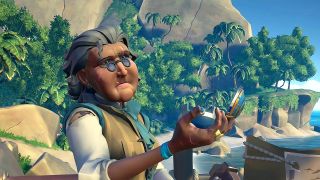 We're nearing the maiden voyage of Sea of Thieves' first free expansion and Rare has shored up the ship with some much needed tweaks before it arrives. Sea of Thieves version 1.07 went live on Tuesday and made waves for dedicated sea dogs and shore dwellers alike. I'm going to stop making nautical references now. A new system for giving supplies (including life-giving bananas) to crewmates was unfortunately removed almost as soon as it went live because it kinda crashed some servers, but these other three changes have proven less troublesome and at least as beneficial.

This update nicely resolves that nasty "getting thrown in the brig and griefed just so you'll quit to make room for somebody's friend" problem with the top-level setting of public and private crews. You'll still pick whether you want to set sail on a sloop or a galleon at the beginning of play, but then you'll choose whether you want your crew to be "open" or "closed." Open crews automatically matchmake in new players to fill their ship to capacity, closed crews don't. This also means you can now set sail all by yourself in a galleon, if you like, whether you're getting things set up for friends on their way or if you just want the extra elbow room. Rare says a later patch will let crews change between open or closed status on the go, but for now you'll have to decide at the outset and leave the session if you change your mind.

High-level players have learned to dread difficult voyages that give out a bunch of rewards they could've gotten back in their novice days: castaway chests, foul skulls, regular ol' animal contracts, that kind of nonsense. With this update, the reward arc should be much more clearly defined: the higher your rank with a faction, the more valuable your rewards will be. Sea of Thieves has thoughts about the usual form of RPG-inspired character progression, opting for more cosmetic options instead of power boostss, but this is one compromise to the "bigger and better" norm that I think everybody will be happy with.

The oceans became a lot more sneaky with this update: submerging yourself in water will now hide your tag and titles from appearing above your character. You've probably seen cool videos of people stealthily swimming up onto enemy ships and taking out their entire crew before anybody realizes what's happening, and this change should make that kind of thing easier to pull off. Though it will still take patience and good timing since you'll be just as easy to see once you re-emerge.

If that's enough to get you back aboard, you might as well load this one into your cannon while you're at it: Rare says it will push out the first trailer for Sea of Thieves: The Hungering Deep later this week. Nice weather for sailing, don't you think?

Looking for more stuff to play? You'll find plenty in our list of the best Xbox One games.