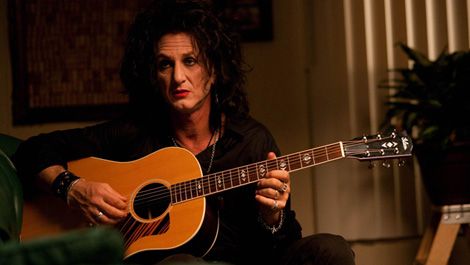 File this one under "unlikely success".

Remember when gossip mag pics surfaced of Sean Penn traipsing around Dublin looking like Robert Smith dropped from a plane? Remember the guffaws?

Well, the film that occasioned said snaps is in fact a charming, stylish and witty journey through America and into history – with, yes, a protagonist who looks like Robert Smith dropped from a plane.

The audacity of Penn’s performance takes a little bedding in. He plays Cheyenne, a former ’80s goth-rocker haunted by how his music may have played a part in a fan’s suicide.

A sweet-natured imp who takes pleasure in bad puns and practical jokes, it’s unlike anything Penn’s done even before you get to the costume – all bed-head hair, creaking leather and makeup.

That it’s only ridiculous for about 10 seconds is testament to Penn’s commitment and to director Paolo Sorrentino’s invention with the plot. Cheyenne is perhaps the first movie rock star to mount a cross-USA quest to avenge himself on his Auschwitz survivor father’s wartime tormentor.

That they get away with this is close to a miracle, especially given it’s the kind of film that will stop so David Byrne and band can perform the title song. How does this happen?

Note the Italian director’s roots. In the tradition of Wim Wenders, this is as much about a European filmmaker’s feelings about America and its genres as it is about plot. Sorrentino’s arthouse smarts enable him to bolt on tough-stuff European history to his version of America as a plasticky playground, and have it remain on the side of the angels.

The States’ wide-open spaces are shot as only outsiders can, the classy cameos deliver, and somehow you have a worthy if unlikely heir to Paris, Texas.