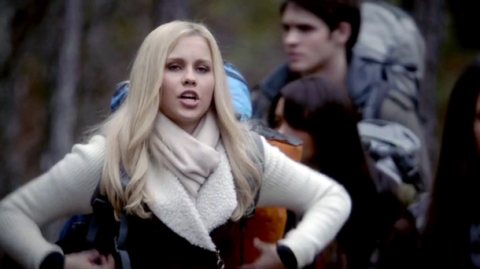 The Vampire Diaries 4.13 “Into The Wild” TV REVIEW

THE ONE WHERE Everyone goes on a camping trip to the find the cure, except Klaus who’s still a danger to Caroline and Tyler despite being trapped in the Gilbert’s house…

VERDICT Warning: you may suffer unwanted flashbacks to the duller moments of Harry Potter And The Deathly Hallows during the course of this episode. By which we mean all that interminable bickering while on a camping holiday guff.

“Into The Wild” seems to have been written in the hope that viewers will be dazzled by the change in location – an island off Nova Scotia rather than Mystic Falls – that we won’t notice that the episode is dreadfully slow and talky, getting a lot of expositional housekeeping out of the way before the resurrection of Silas no doubt kicks off the next wave of proper action. It seems odd that nobody has thought to ask Professor Creepy about his previous experiences on the island before now, but hey, camping trips are made for storytelling.

It’s also bizarre how stupidly everybody is acting. Stefan makes a big deal about not letting the tombstone out of his sight, before leaving it behind for Professor Creepy to nick. Bonnie wanders off into the forest on her own. Nobody seems too concerned that someone tried to kill Jeremy with an axe. Or that somebody else killed his killer. Oh, they mention it, then promptly forget it. Then there are all the traps – clearly someone is maintaining them – but everybody splits up and blunders about like they’re in an episode of Scooby-Doo.

Maybe we’re supposed to think all their bickering is making them careless, but in that case Professor Creepy would have had to have built their bickering into his plans… oh, hang on – maybe that isn’t such a stupid plan on this show.

Seriously, though, when the driving force behind an episode’s plot is “evil genius manoeuvres his pawns into position for his endgame”, you need the evil genius’s plan to be clever and ingenious, not his pawns acting like numpties. Only Damon is onto him, and even he stupidly turns his back on Professor Creepy when Elena shows up to guilt trip him.

There are some good relationship moments, especially Damon as much as admitting (at last) that she prefers Elena as a vampire. Rebekah wanting to become human isn’t quite so convincing; last week you could have sympathised with her “I want babies” plea, but this week’s “being a vampire is hell” comes from nowhere, and doesn’t really wash when Damon seems to love it too much. However, it’s good to see how Rebekah’s yearning to become human is affecting Stefan.

No shortage of great lines either, though most of them come for the episode’s B-plot, which is actually a lot more interesting. Klaus rises to Tyler’s taunts to prove he can still be dangerous even when trapped by skewering Caroline (“Now that was worth the calories!”). His pride then means he can’t save her with his blood, because that would mean Tyler had won. But then Caroline, of course, wins him round. It should be as gloopy as hell, but somehow it works, and this is mainly thanks to Jeff Morgan who really seems to have upped his game since the announcement of The Originals , almost as if he’s trying to prove he’s up to the task of carrying a show. Emotionally he travels from Hannibal Lecter to Phantom of the Opera over the 45 minutes, and while he’s still a little arch at times, he’s getting better all the time at showing the subtle cracks within the bluster.

GRATUITOUS SHIRTLESS SCENE And it is gratuitous again this week. Very gratuitous. The camera lovingly lingers on Jeremy’s nipples as Bonnie takes photos of his tattoo (using the macro option by the looks of it). Like we couldn’t have just seen her studying some snaps she took earlier…

LABOURED GAG Not only was the sunblock gag not particularly funny, it didn’t really make much sense, since the place looked cold, grey and miserable with about as much chance of sun as a wet weekend in Herne Bay. We couldn’t work out if Damon was incredulous Prof Creepy would offer him sunblock because he was a vampire, or because there was as much chance of getting sunburn as there was of seeing unicorns. For that matter, do vampires feel the cold? Was there any need for Elena to wear all that padding?

MISSING MUSIC Amazingly, for the first time in the show’s history, this episode has no rock or pop songs on the soundtrack.

BEST LINES:
Rebekah: “So, then leave. Out of everyone, your presence is the least necessary.”
Stefan: “Don’t start.”
Rebekah: “I’m merely stating the facts. Jeremy has a spell on his body. Bonnie’s the witch that unseals the cure. Shane is the human compass. You and I have the tombstone which tells us god knows what. And Elena has no point.”
Damon: “What about me?”
Rebekah: “You have a nice behind.”

New episodes of The Vampires Diaries season four will debut in the UK on ITV2 in the next few weeks.

• Read more of our reviews for The Vampire Diaries season four
• Need to find an episode review? Check out our new TV Reviews Index