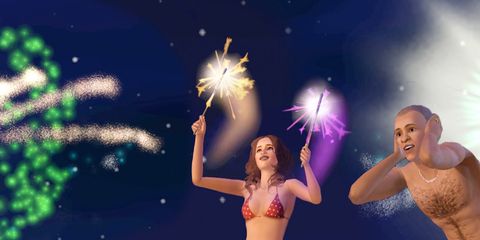 Since The Sims 3 launched in 2009, Sims have vacationed in exotic lands, discovered new careers, mingled with celebrities and the supernatural, and maybe even adopted a pet or two. But. But! They’ve done it all to the backdrop of static weather. Each day had blue skies, green grass, and even temperatures. This all changes with The Sims 3: Seasons, the eighth expansion for the base game. Adding seasonal touches and weather effects brings The Sims 3 to life in a way that was sorely missing before, though the rain and snow can’t cover up this series’ existing bugs.

Seasons doesn’t come with a new world for Sims to inhabit, making it the second expansion after Generations to do so. However, you can buy a new town right from the menu if you’re not satisfied with the ones you already have. In-game prompts to purchase more content from The Sims 3 online store have gotten more intrusive with every expansion, and now you don’t even have to be in the game before you’re asked to buy more; it’s right on the loading screen. The ease in which players can add content to their games without having to leave it is convenient, but it’s also a little frustrating to be asked to spend more money after purchasing yet another expansion that costs almost as much as the game itself.

This expansion updates the map by turning large parks into festival grounds that have new activities for each time of year. The festivals, a big improvement over the standard parks, are a fun addition, letting Sims participate in face-painting, hot dog-eating contests, egg hunts, and kissing booths, to name a few. If you’re tired of the same old parks, you can edit your town and add any of the pre-built festival grounds included with the expansion. It’s not quite as good as having a brand new world, but it does go a long way towards making your existing towns feel new again.

See what's in store with The Sims 3 Seasons with this producer walkthrough.

Players have full control over which seasons come and how long they last. By default, spring, summer, fall, and winter each last seven days, but can be adjusted to span anywhere from three to 28 days. Adjusting on the fly works perfectly, and since gameplay in The Sims 3 is all about creating and controlling the in-game world, being able to adapt seasons to your specifications is a great touch.

Like seasons, weather can be easily enabled or disabled to suit your mood. Spring is likely to be rainy, while winter will see heavy snows, and hail and fog may also appear on the forecast. Checking the weather forecast can be a life-saver, since too much sun, rain, or cold could cause Sims to get sick, or, in extreme cases, meet the Grim Reaper. While deaths from frostbite or spontaneous combustion are rare, preventing the more-common illnesses allows you to make use of the new outerwear and weather-specific accessories, tying the new wardrobe choices to the gameplay in a refreshing way that no other expansion has accomplished.

This expansion brings more to it than just some weather; it encompasses everything your Sims do, whether you have all of the other expansions or none of them. As the seasons turn, there are many immersive touches that highlight each time of year. Frost on windows, wildflowers popping up, and leaves falling in shades of red and orange are just a few of the ways Seasons brings The Sims 3 to life in a whole new way. Seasonal holidays give Sims something to look forward to on the calendar for the first time: a day off from work or school to celebrate events like Spooky Day or Snowflake Day. Holidays are a great touch not only because they give the player even more to do, but because they help set the tone of each season with familiar rituals like trick-or-treating or exchanging gifts.

There are also a few non-seasonal additions to round out this expansion pack. The game’s catalogue has been updated with new build items and furniture, much of which is designed to enhance outdoor spaces. While not the focus of the expansion, extra furnishings are useful, and the new blueprint mode lets you get the most out of your square footage. Blueprints aren’t always practical, since they’re not designed for small or uniquely shaped rooms, but they are a handy option for players who would rather just get on with the simming.

Unfortunately, the rain can’t wash away some of this series’ existing bugs. You might encounter minor glitches that require Sims to be reset and occasional freezing and saving problems. None of these are new, but it’s disappointing that even with frequent updates, EA still hasn’t dealt with these problems, some of which have been around since 2009. Though discouraging, the bugs aren’t deal-breakers.

Despite those few issues, The Sims 3: Seasons is the strongest expansion yet. Whether you’ve been playing consistently for three years or your Sims have been long abandoned, this expansion makes the game feel new again. It’s hard not to feel like it should have come first, not eighth, and the reappearance of old glitches is certainly distracting, but it’s easy to look past those issues when you’re planning your Spooky Day party, WooHooing in an igloo, or searching the skies for UFOs. More than three years after The Sims 3 hit stores, Seasons shows that it can be as engaging as ever.