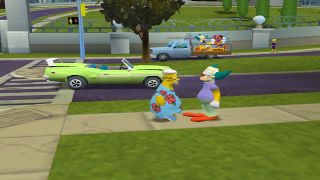 The Simpsons Hit and Run 2 was once in development before EA won the rights to produce The Simpsons games. Hit and Run's senior designer Joe McGinn revealed in an interview with GAME Media that there were some very early gameplay prototypes of a sequel to the madcap driving game based in Springfield.

"I remember our psychics guru - Grey Mayer - got connected vehicles working," McGinn says, "so you could have a trailer being pulled behind a car with some fun results."

It's interesting to hear that ideas for a sequel was actually being worked on at some stage after the release of the first, but alas, it was not to be. "We never got very far before EA won the right to the Simpsons Movie game," McGinn explains, "so sadly there was nothing we could do but move on."

Hit and Run originally released back in 2003 on GameCube, PS2, and Xbox, and saw you playing as a variety of different Simpsons characters driving all manner of vehicles around to complete timed missions. With an open-world like feel and plenty of Simpsons humour, it's cemented its place as one of the more memorable games to come out of the famous TV show.

Just last year, Hit and Run's creator Vlad Ceraldi expressed the desire to see the game remastered or remade in an interview with Ladbible. McGinn also seems to share the same sentiment, saying, "I would love to have it myself on my Nintendo Switch." McGinn goes on to point out that if you can find the PC version, it works on modern versions of Windows.

As one of the standout games based on the famous cartoon family, the love for The Simpsons Hit and Run continues to this day. I can't help but wonder just what the sequel would have shaped up to be and how it would've expanded on the first. Just knowing a prototype once existed is pretty tantalising, isn't it? Still, we can live in hope that maybe we'll see a remaster someday.

Return to Springfield with our pick of the best Simpsons episodes.