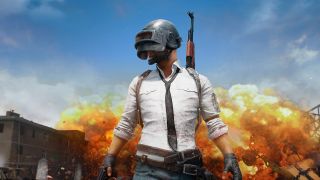 PlayerUnknown’s Battlegrounds is officially a phenomenon. What began as a quiet also-ran in the mold of Day-Z and H1Z1 has blossomed into one of the most played, most streamed games of the year. For such an unassuming, simple-in-concept game, PUBG has achieved dizzying heights of popularity and success. So what’s its secret? How does a passion project from a humble Scottish modder-turned-developer explode into an international sensation?

For starters, and most importantly, PUBG is (nearly) as fun to watch as is it to play. It’s the kind of brutal entertainment we’ve always associated with video games (and shooters in particular) blended with the morbid, The Most Dangerous Game pleasure of watching human beings relentlessly hunt each other. But it’s not just a Battle Royale, Hunger Games sort of appeal that PUBG traffics in, though those influences are obvious. More so than either of those properties, PUBG relies on a sense of empathetic desperation.

Intentionally or not, PUBG is a nearly perfectly constructed anxiety machine. It starts with the orgiastic violence at the beginning of each match. Mobs of players ruthlessly maul each other or dump munitions into each other’s soft, fleshy bodies in a high energy, bloody frenzy. It’s immediately clear not only how savage the weapons on offer are but just how many other murder-hungry players are primed to mercilessly cut you down on their way to the top of the heap.

But after this release the violence valve immediately tightens down, so that you’re frozen, helplessly seated on a plane and surrounded by the same murderous sociopaths who were just delighting in all the uncorked savagery and bloodletting you just witnessed. All those cold, motionless faces, trapped in the moment of expectation before the next big release, when the valve is twisted again and bodies start to drop out into space, deploying across the map and parachuting down to the murder playground where today’s drama will play out.

And that’s where the anxiety really begins. Watching your fellow murderers sail towards the ground, watching their parachutes deploy, it’s impossible not to feel your pulse quicken just a little, even if you’re just a casual observer. This is especially true if you see some of those tell-tale canvas domes careening down towards the spot you’ve selected for your own dropzone. The deployment phase of PUBG is one of its most brilliant and underappreciated sequences. There’s an illusory sense of control when you choose a spot on the map to jump out of the plane, a sensation often instantly shattered when you realize the plane is vomiting a crew of other players right in your wake. Instead of an isolated sanctuary you’re dropping into some very active killing fields, and that’s when the tension really ratchets up.

The Evolution of PlayerUnknown's Battlegrounds, and how it became the Hunger Games of shooters

From the limited control and sense of exposure you feel dropping slowly to the ground you’re unleashed at full speed to crash around and begin the desperate, nervous scavenging that characterizes PUBG’s next (and perhaps most important phase). It’s this phase that’s the key to PUBG’s watchability, and the main thing that distinguishes it from other popular multiplayer shooters, and from other games that traditionally hoard streaming services’ viewership. That feeling of exposure that started building while parachuting down grows exponentially in the first moments where you’re essentially naked and powerless. Bolting into a house and scouring it for weapons and armor becomes incredibly tense (and very entertaining) when you know a quick and brutal death might lie behind each door, crouched in a bathtub or corner.

While PUBG has drawn some criticism because of the way it naturally encourages cautious play (and what the critical might call cowardly behavior), even the most careful strategies are entertaining to watch because of one very simple element: the constant reminder, in the form of a player count in the upper right corner of the screen, of how many players are being constantly culled out on this murderous island. There’s something inherently satisfying about being cautious and being rewarded for playing smart and surviving, especially for players (and viewers) who are used to being relentlessly gunned down in shooters seconds after they spawn by more experienced players.

It takes all sorts

PUBG is noob friendly in a way very few of those shooters are because it rewards different playstyles equally. If you are the aggressive sort and want to dive right into a heated gunfight and mix it up as quickly as possible, you’re rewarded for every kill you manage to rack up. But the game is also balanced to reward players inclined to carefully hoard supplies and do their best to avoid contact until it’s absolutely necessary. And when those players do encounter each other, what follows is a sudden explosion of intense, deadly combat that’s a deeply satisfying pressure release, even if you end up on the losing end of it. All of the creeping and crawling and hoarding and peeking inexorably builds an anxiety that is gloriously discharged during these short, violent exchanges. Alternately, it can lead to erratic player behavior that’s just as fun, watching as a camper slowly loses patience with the waiting game and ends up driving a buggy at lethal speed off a bridge or into a town infested with snipers.

It’s easy to say that PUBG has become such a huge success because it’s so much fun to watch. That’s true, and in the way of all viral games of this sort, that viewing audience has translated into more sales, more players, and more streams, which have in turn generated more sales, on and on to the tune of more than a hundred million dollars. But the real secret isn’t that it’s a fantastic game to spectate... it’s why. PUBG exploits some of the most primal human emotions in a basic, repeatable way, and it’s a beautifully tuned machine that starts hot, slows to build tension, and then comes to a blazing crescendo in almost every game, regardless of the players or circumstances.