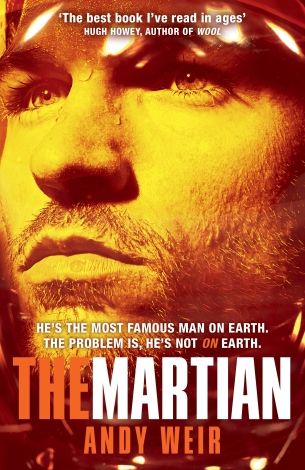 The Martian comes highly recommended. Originally self-published in 2012, it garnered thousands of great reviews and praise from none other than Stephen Baxter. So does this story of an astronaut stranded on Mars live up to the hype? Mostly, yes.

Mark Watney is an astronaut on NASA’s third excursion to the Red Planet. Ares 3 is only a few days into its mission when a sandstorm hits. The ascent vehicle is threatened by Mars’ killer winds, so NASA orders its astronauts to mount up and head home. Watney is hit by debris and knocked flying. He’s lost, presumed dead, and the team’s commander makes the tough call to launch. But Watney is wounded, but alive. Waking up after his comrades have gone, equipped with limited resources, he has to figure out a way to survive.

The amount of research here is astounding. We’re suckers for well-grounded fiction, and on the technical side The Martian is exemplary. Andy Weir has a good knowledge of several fields of science (much like his astronaut heroes), and besides a plausible manned Mars mission plan, we get some cracking lessons in botany, astrophysics, chemistry and mechanical engineering. Watney, an engineer/botanist, details his various survival schemes in his log. These witty first-person segments are the better part of the novel. When we shift to third-person passages detailing NASA’s attempts to rescue him, it’s a jarring change of gear at first, and they are less engaging throughout.

Engagement is one of the book’s two weaknesses. There’s little emotional heft. Watney’s an astronaut, and a certain devil-may-care attitude to his own death is to be expected (warning: astronauts are awesome. Reading about astronauts can lead to feelings of inadequacy). But the sections on Earth, which could have injected genuine feeling, follow a similarly joke-heavy trajectory. The Martian is funny - especially Watney - but backchat, considered swearing and fist-pumping take the place of poignancy. This kind of Whedon-esque interaction is the norm in idealised geek culture, but not absolutely everybody behaves this way (even at NASA).

Admittedly, it’s a difficult balance to strike, for The Martian could easily have gone the other way and slipped into the mawkishness of 1998 film Armageddon . Even so, at times it the scenario seems like a jolly set of Dungeons & Dragons puzzles rather than a deadly situation faced by real people. This is a very outward-looking book. All Watney’s problems are ones that can be solved by the application of ingenuity. He doesn’t get lonely, or freak out, or miss pancakes. His inner life is skated over, albeit adroitly.

The book’s other weakness is one partly brought on by the nature of the narrative. The Martian has been compared to Apollo 13 (the real life disaster and the hit Tom Hanks movie!). Fair enough, but there’s a subtle difference – on Apollo 13 one thing went wrong that led to a lot of other things going wrong. In The Martian , everything goes wrong. For the sake of story it has to, but Watney’s chain of disasters stretch credulity even as they have you turning the page. This is not a Martian Castaway (another Tom Hanks movie!) about the psychology of isolation, but perhaps with a bit of such affect the unlikelihood of Watney’s serial misfortunes would have been less noticeable.

The film rights have been sold, and it strikes us that, with the right director, this might be a tale that makes for a better film (perhaps with Tom Hanks?!). Impressive, but definitely one for the head, not the heart.