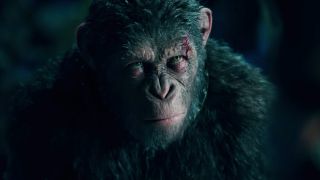 "I can't help thinking that, somewhere in the universe, there has to be something better than man."

Captured, beaten, and forced into a labour camp by the Japanese army in 1943, French writer Pierre Boulle relived his harrowing experiences for the rest of his life, first exorcising them in his gruelling war novel The Bridge Over the River Kwai (1952) before turning to science-fiction in 1963 with Planet of the Apes.

A dark allegory about inhumanity, in which a trio of humans explore a planet orbiting the star Betelgeuse, which is populated by intelligent apes, the book launched one of the biggest franchises ever made. Spanning five decades, nine movies, two TV series, hundreds of comics, and a headscratcher of a timeline, Planet of the Apes became the rebel child of mainstream sci-fi, each new chapter defining and reflecting controversial developments in US social politics.

While the franchise’s main gambit – reminding us of our inability to stop treating each other like animals – has undeniable subtextual power, it has also quietly evolved through two critical turning points in Hollywood sci-fi history, setting benchmarks for special effects and storytelling both before Star Wars and after Avatar. Boulle’s book laid the groundwork, but it shares surprisingly little with any of the films, and a direct adaptation has never been attempted.

Framing his story with a side-strand in which a pair of honeymooners discover a message in a bottle, Boulle’s action is set entirely on a remote monkey plane  that definitely isn’t Earth, and features no spoken dialogue. Back in the early ’60s, science fiction was the terrain of the B-movie, but the success of Fantastic Voyage in 1966 began to change that, and prompted 20th Century Fox to hunt out other “respectable” fantasy titles to adapt – bringing them to Boulle and Twilight Zone creator Rod Serling.

“As talented and creative a man as Boulle is,” Serling observed at the time, “he doesn’t have the deftness of a science-fiction writer. Boulle’s book was a prolonged allegory about morality… But it contained within its structure a walloping science-fiction idea.” So out went Boulle and in came Serling, bringing with him a “walloping” re-written script for the film that climaxed with what’s now  recognised as one of the greatest twist endings of all time.

Andy Serkis: From actor to ape to game creator with Planet of the Apes: Last Frontier

Charlton Heston was cast in the lead, Roddy McDowall donned John Chambers’ monkey suit, Franklin J. Schaffner took the director’s chair and cinema history was made long before Heston fell to his knees and realised, yes, he was on planet Earth after all. Nominated for three Oscars and winning one (for Chambers’ stellar effects work), the 1968 film became a bona fide phenomenon. Luckily, it left plenty of room for sequels – and the film quickly ballooned into a time-travelling, genre-stretching behemoth that gave audiences a new chapter almost every year until 1973.

Conquest of the Planet of the Apes (1972), meanwhile, gave us civil rights marches, race riots and Caesar – the child of the revolution who would go on to shape the franchise. The future set Battle for the Planet of the Apes (1973) wrapped things up, sort of, by closing the loop on the original film, but the growing appetite for all things ape meant the universe was more than ready to expand beyond the cinema.

Not that it hadn’t already. Ever since the first film opened, the ape faces of Taylor, Ursus and Zauis had been everywhere. Preceding Star Wars’ blanket merchandise campaign by almost a decade, Fox pushed POTA into every toy shop and supermarket throughout the late ’60s – with play-sets, action figures, monkey masks, lunchboxes, piggy banks, kites, puzzles, plush dolls and costume kits fuelling a worldwide ‘ape mania’.

King of the collectables (and still worth a fortune on eBay) were the Topps trading card sets, which repackaged scenes from the movies with sticks of gum.

With more than 300 individual Apes items on sale by the end of 1973, POTA was bigger than ever when the movie series wrapped up – helped in part by the syndication of TV reruns. Not wanting to lose momentum, Fox commissioned Serling to pitch an idea for Planet of the Apes: The Series and, taking bits of his draft script and ignoring a lot more, the TV show launched in 1974 as a separate, stand-alone chapter set in the middle of the Apeverse.

Ron Harper and James Naughton were cast as the new astronauts who found themselves cutting into the timeline somewhere after Beneath, and Roddy McDowall returned as a new ape – but his appearance wasn’t the only thing that jarred. Why were the native humans speaking? Where was the nuclear apocalypse? What happened to all the politics? Why was one episode all about evil shark gods?!

Clearly, Fox saw POTA less as a universe and more as a franchise – something the fans responded to by switching off their TVs. Cancelled after just 14 episodes, POTA: The Series was an expensive flop – but Fox wasn’t ready to call it quits just yet. Commissioning Return to the Planet of the Apes as an animated series in 1975, the producers turned to DePatie-Freleng enterprises (the company set up by Looney Tunes legend Friz Freleng) and gave it free rein… but no money.

The bizarre result is a show that still stands as the biggest anomaly in the POTA universe – a weird mesh of big ideas and zero budget that gamely tries to take the action back to the movie timeline.

Another set of astronauts crash land on Earth, this time finding an alt-future ape planet full of colonnaded monkey palaces, chimps flying jet-planes and an underclass of human mutants. Hampered by a ridiculous budget, the animators were forced to use as many still images as they could to keep the costs down. Unsurprisingly, an ugly, cheap Saturday morning ’toon that skipped over five films’ worth of backstory didn’t last long – and was axed after 13 episodes

Survival of the fittest

Driven into obscurity by the likes of Star Wars and the glossier sci-fi appetites of the ’80s and ’90s, POTA wouldn’t be back on screens until Tim Burton’s “reimagining” in 2001 – but there was another, alternative, Apeverse out there that had been going strong ever since the first film.

Switching publishers a dozen times over the decades, the POTA comics began as a manga in 1968 and survived almost 50 years of conflicting storylines, film tie-ins, franchise crossovers and multiverse upheavals. Still best remembered for its Marvel run between 1974-77, the Stan Lee-backed POTA series ran for 29 issues and featured original canon stories in black-and-white panels alongside articles on the making of the movies.

The licence changed hands every few years thereafter, with Boom! Studios taking over in 2011, launching the current series, which now stands as the longest-running adaptation to date. Wisely sidestepping the multiverse by setting their story 500 years before the original 1968 film, Boom! has since confused everyone once again by publishing a Star Trek crossover in 2014 (The Primate Directive) that saw Captain Kirk and George Taylor (Charlton Heston’s character) teaming up to try to stop the klingons from installing a puppet gorilla government.

By 2014, of course, cinemagoers had already been reintroduced to POTA via Tim Burton’s oft-forgotten, mostly maligned 2001 Planet of the Apes. Paying homage to the kitsch of the original film series but abandoning its timeline, the film positioned itself closer to Boulle’s book than Schaffner’s movie, preserving the “other” shock ending (Earth is overrun with apes!) that was written out in 1968. A commercial success but a critical failure, Burton’s film failed to reignite interest in the franchise – though it did kick-start another merchandise blitz.

New action figures, new trading cards and new apes flooded supermarket shelves once again, alongside William T. Quick’s novelisation of the film. Itself one of many movie tie-ins, the book inspired two prequel novels, The Fall and Colony, which added even more chapters to the newly expanding timeline, though they failed to blend with the continuity of the comics, the films and the TV shows.

Also up was the franchise’s first video game – a PlayStation tie-in made without any seeming knowledge of Burton’s film; arriving late, crashing early and disappearing without a trace. Except that it wasn’t technically the first POTA game. Originally developed for the Atari 2600, an earlier Apes title had been swallowed up in the videogame crash of 1983.

Presumed lost until the mid ’90s (when someone found a copy in a mislabelled box), the game was subsequently rejigged by indie developers Retrodesign and published online as Revenge of the Apes in 2003.

Almost a decade after Burton’s film, talk stirred of a ‘proper’ reboot. Post-Avatar and post-Gollum, SFX  technology had advanced enough for producers to consider a new take on POTA that didn’t rely on prosthetics. Led by Andy Serkis’ motion-capture performance, Rise of the Planet of the Apes was a global triumph in 2011. Transporting the Apeverse back to the beginning (again), it grounded the franchise with new human leads, believable effects and a viral-outbreak origin story that re-opened all the doors that had been slammed shut over the previous decades.

Dawn of the Planet of the Apes followed in 2014, with War for the Planet of the Apes opening this summer, bringing the story strands ever closer to the dystopia that Boulle originally envisioned. Tying the broad themes back into current social politics, the new series is as provocative today as the first films were in the ’60s – this year’s battle-heavy chapter even draws inspiration from the film of Bridge on the River Kwai.

No more monkeying around

More importantly, POTA is back. Caesar’s face is on t-shirts again. Action figures are back on the shelves. Comics are taking up the new timeline. There’s even talk of a ride being built at a new theme park in Malaysia. “It endures,” says long-time fan and one-time Battle extra John Landis.

I wouldn’t be surprised if its next incarnation is a Broadway musical.” From book to film to TV to comics and beyond, the Apeverse has become an untameable beast. But with more knots, holes and false starts than any other movie mythology, it’s big enough now to hide everything behind a 400lb CG gorilla and the promise of more films to come.

“It might be three films, it could be four. It could be five. Who knows?” says Andy Serkis of the rebooted series. “The journey will continue.”

This feature originally appeared our sister publication Total Film magazine, issue 260. Pick up the latest edition now or subscribe so you never miss an issue.