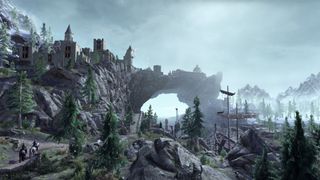 Zenimax Online Studios has announced the full details for its latest expansion to the The Elder Scrolls Online, which will be releasing on PC, PS4, and Xbox One later this year.

Detailing the new Chapter in a special livestream today, Zenimax revealed that The Elder Scrolls Online: Greymoor will open up western Skyrim as a new zone to explore for players, promising a "gothic main story quest line" centered around taking down a "powerful Vampire Lord".

In addition, Greymoor will introduce a new gameplay system, Antiquities, another 12-player Trial, Kyne’s Aegis, and a vast range of dungeons, quests, world events, delves, quality of life updates, and all the other expected features of a new expansion to The Elder Scrolls Online universe.

Greymoor won't be launching till May 18 on PC and June 2 on console but, in the lead up to its release, Zenimax will be kicking off its new Skyrim-based adventure with The Elder Scrolls Online: Harrowstorm dungeon DLC pack this February, which includes two new dungeons for players to explore and champion.

The studio also promised that 2020 will be a strong and exciting year for The Elder Scrolls Online, with regular updates and content drops throughout the next 12 months to accompany Greymoor's release. Part of that includes a new physical and Collector's Edition of ESO for PC and console, which will hit stores when the expansion rolls out later this year.